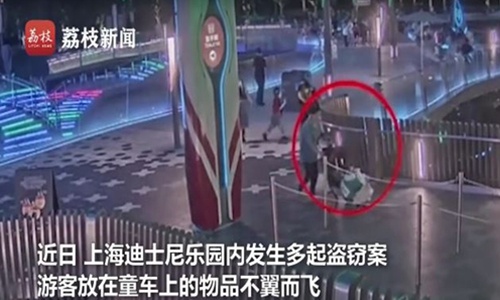 A middle-aged woman in Shanghai steals the items put in a stroller of a tourist at Shanghai Disney Resort. Photo: Screenshot of a video posted by Lizhi Video

A middle-aged woman in Shanghai was arrested by police recently for stealing belongings of other tourists at Shanghai Disney Resort. The woman, an annual pass holder at the park, said she just "loved the feeling of stealing."

Police started an investigation after receiving several similar reports of theft in the park at the end of August. In these cases, the victims had parked their baby strollers at the entrance of an amusement ride, only to find the belongings they had left on the strollers gone after they returned,  reported Xinhua News Agency on Wednesday.

Public surveillance videos showed it was the woman, surnamed Shen, who was the culprit. All the stolen items were Disney-related goods.

Shen was seized on September 2 at her home, together with 17 stolen items. She confessed that stealing things was her hobby, and she "felt comfortable" when she stole something and brought it home.