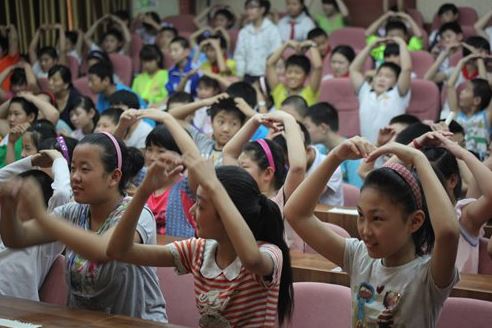 Young Chinese students learn how to protect themselves from sexual harassment in a class to publicize sex education and prevention from sexual assault at Beida Huaishu No.1 Primary School in Jinan, East China's Shandong Province. (Photo: IC)

Shanghai is restricting people with a criminal record of sexual assault of minors in certain occupations, including teachers, coaches, security guards and divers, making it the first to implement such a regulation at the provincial level in China. A total of 16 organizations in Shanghai launched an employment restriction system on April 3 to enhance investigation in the employment process, to screen people convicted of sexual assault of minors, thepaper.cn reported on Wednesday.Other than occupations that have direct contact with minors, such as teachers, coaches, and childcare workers, the system will also be applied to employees in industries that may bring about close contact with minors as well, such as security guards and drivers.A mandatory reporting system will also be set up for applicants of jobs that have close contact with minors, requiring the applicants to truthfully report whether they have any criminal record on sexual assaults, thepaper said.The system enhances protection of minors in eight aspects, including appointment checking, employment restrictions and supervision and management, said thepaper. It comes as some criminals take advantage of their jobs to sexually assault minors. And there is a high possibility that they would commit the same offense again, according to thepaper. Prior to Shanghai's restrictions, Guangzhou, South China's Guangdong Province, implemented a similar system for checking criminal records of people convicted of sexual assault of minors,  the Guangzhou Daily reported in March.More than 300 cases of child sexual assaults involving 750 minors were reported last year in China, according to a 2019 report released by the Girls' Protection Fund of the China Foundation of Culture and Arts for Children and Beijing All in One Foundation.