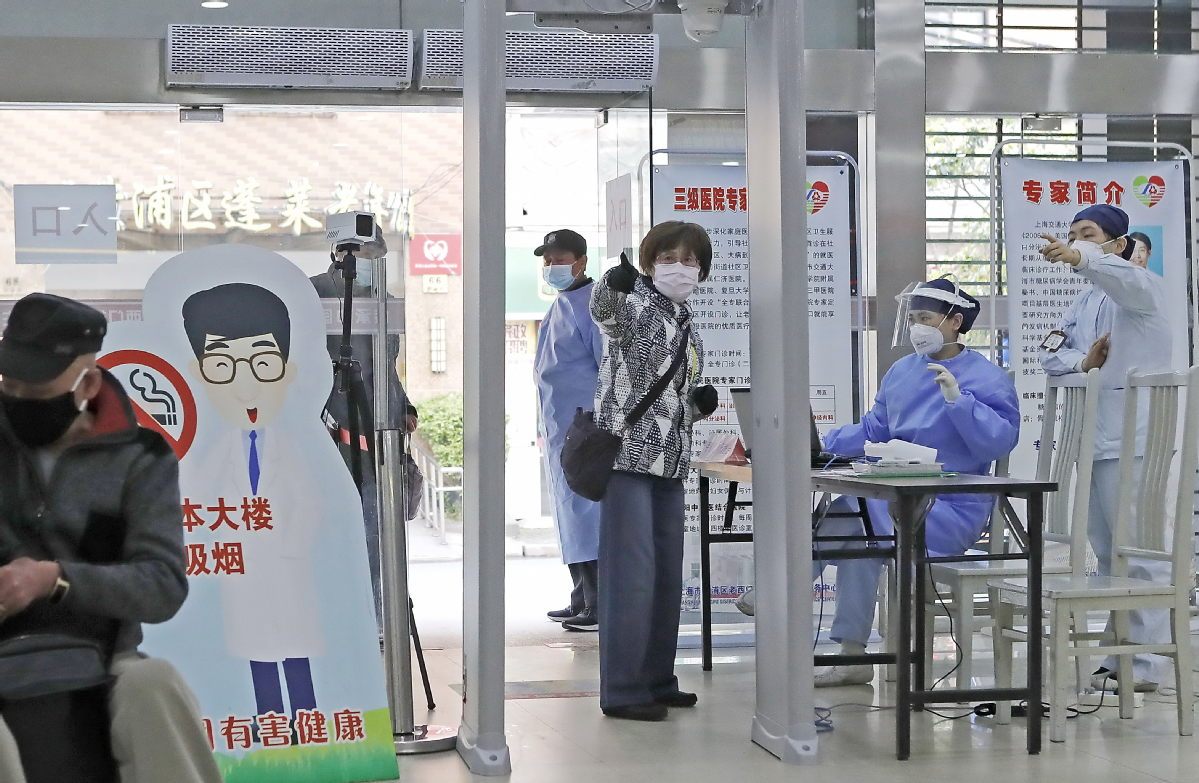 A nurse directs a patient for further treatment at a community health center in Shanghai earlier this month. (Photo: China Daily)

These fever sentinel sites, built with community health centers, are smaller in scale but functioning similarly as the city's ongoing 117 fever clinics, which have been functioning as the first stations to screen and distinguish COVID-19 patients during the novel coronavirus outbreak since late January, according to the Shanghai Municipal Health Commission.

Face-lifts have been going on in the community health centers to complete the functions of the fever sentinel sites, the commission said.

These sites will continue to allow the city's medical team to more quickly identify fever patients with known and unknown reasons, the commission added.

Set in an independent area with good ventilation and a separate air conditioning system in a community health center, each sentinel site consists of a contaminated area, a semi-contaminated area and a clean area and rooms for medical consultation, medical tests and X-ray checks, according to the construction guideline issued by the Shanghai health authority.

Each site will be equipped with doctors who have clinical experience and training in infectious diseases. Medical workers must wear standard personal protective equipment in those areas, according to the Shanghai Municipal Health Commission. Epidemiological investigation on patients is also part of such a site's responsibilities.

Wang Lili, a general practitioner who works at a fever sentinel site in Changzheng Town Community Health Center in Putuo district, said that the centers will be responsible for following up on patients' health by phone. Their disease and contact information will be shared with the subdistrict authority where the patient lives, the upper-level hospital in charge, the district center for disease control and prevention and the district health commission.

"These measures are aimed to carry out screening and disease management for these fever patients in a timely manner and blow warning whistles for infectious disease control and prevention," said Hua Zhijia, deputy director of the community health center.

The expansion of the surveillance network in the city is part of Shanghai's quest to establish a world-class public health emergency system by 2025, according to a guideline released by the municipal government last week.

Zhang Wenhong, leader of the Shanghai team of experts in the treatment of COVID-19 cases and director of the department of infectious diseases at Shanghai Huashan Hospital, said that Shanghai had responded well to the pandemic, but a more comprehensive network will enhance the municipality's capability to cope with similar emergencies in the future.

"We've responded well to SARS, H5N1 and H7N1 with our highly efficient urban management. Every time an epidemic occurs, we gain some experience and notice the need to update our prevention and control system. The more complete we are, the less we'll lose track of infection cases," Zhang said.