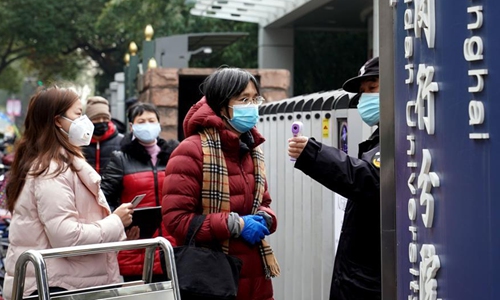 Staff measures the body temperature at the entrance of a hospital in Shanghai, East China, February 3, 2020. Various measures are taken across China to combat the novel coronavirus. (Photo: Xinhua)

Home to over 200,000 foreigners, Shanghai has made great efforts to help them combat the novel coronavirus by providing safety information in five languages and establishing prevention methods in neighborhood communities.

The Global Times met with members of Shanghai's expat community to hear their concerns about living in the city amid reports that some have claimed they're afraid of being trapped due to the virus outbreak.

So far, 254 coronavirus cases have been reported in the city, with patients aged between 7 months and 88 years old, the Shanghai Health Commission said Thursday.

Rishi Harani, 27, from Ireland, a businessman who has been working in Shanghai for three years, tried to inform others about the reality of the situation.

"To be honest, it's not that bad in Shanghai," Harani said last week in a vlog posted on YouTube. While wearing a facemask, Harani went to local supermarkets and walked through city streets to show the daily routines of others.

Harani's father is a doctor. When news of the virus was first reported, he asked his father if he should be worried.

"He (my dad) told me to take care of myself and follow the precautions," Harani told the Global Times on Thursday.

After the holidays were extended for one week, "My dad said you could come home if you are bored," but also suggested it would be better to avoid traveling by plane during this period.

Chinese-American Head of Mental Health at Shanghai United Family Pudong Hospital George Hu (43) shared his opinions with the Global Times and said, "I do not feel any need to panic.

Though news of the rising number of infected people is alarming, "many more may be suffering from anxiety, panic, and other feelings caused by this situation," Hu said, adding that people should consider muting WeChat group notifications that promote information from "unreliable sources."

Vincent, a father of two who works as a creative strategist and consultant for consumer events, echoed Hu's view.

The father admitted that empty city streets are "slightly disconcerting," but also pointed out that an official curfew had not been implemented.

"The shelves in food stores are stacked, some restaurants are open, and people are generally calm," he told the Global Times.

"I feel that the government has done an amazing job on containment," Vincent said. "So, keeping things in perspective, I see no need to panic beyond sensible caution."

To combat the virus, staying at home is the most effective method, said Zhang Wenhong, head of the coronavirus treatment team in Shanghai on Thursday.

Actress and singer, Zina, who lives in Shanghai, has never been in a situation like this and has remained home since January 22.

Since then, she has watched movies and posted videos on Douyin. "I am not panicking. And staying with family is good," Zina told the Global Times.

In Shanghai, the "situation is under control," said Zina, who also mentioned that as a safety precaution, strangers are prohibited from entering the residential community where she lives.

Hu regards this period as a good time to be with family. Hu suggested that now would be a good time to explore baking, scientific experiments, new recipes, or origami.