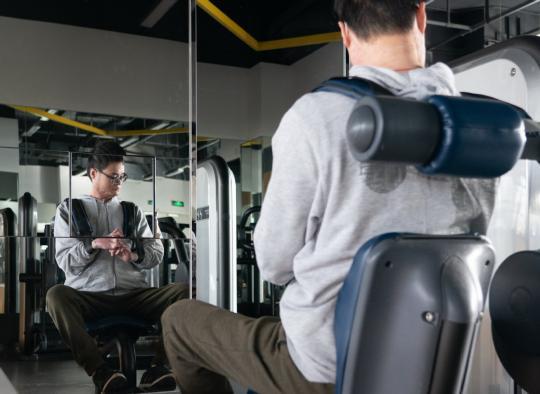 Wang Haibin exercises in a gym near his home in Shanghai on Dec 25.(Photo: agencies)

A Shanghai resident hailed as a hero for preventing the loss of lives during a fire five years ago received a shower of blessings ahead of his wedding on New Year's Day.

On June 16, 2015, Wang Haibin risked his life to wake his neighbors as a fire raged in their building in the middle of the night. Wang also opened the building's iron gate to let firefighters in, suffering severe burns in the process.

He bears visible scars on his body because of the fire, which was sparked by a faulty electric bike battery.

"My wife said a good appearance is a must for an idol, but for a lifelong partner, a kind heart is more important," Wang, 31, said.

Their wedding was held in Gaoyou, Jiangsu province, the city he and his wife hail from. Wang was raised in Gaoyou and moved to Shanghai in his early teens.

The fire also left Wang with some impaired bodily functions. For example, he can no longer feel cold and has difficulty perspiring as his pores have been badly damaged by the extensive burns. Performing certain actions, including squatting and running, have also become near impossible.

"Winter is particularly difficult for me as cracks easily develop on my skin," he said.

But Wang, who often wears bandages on his fingers and the backs of his hands in winter, said he is grateful to still have 10 digits－the original plan was to amputate them all except his right thumb.

Wang said it was around 1 am when the six-story residential building he was living in caught fire. Wang, who lived on the fifth floor, said he was woken up by the smoke. When peering out the window, he noticed that firefighters and security workers were unable to enter the building as the gate was locked.

While making his way to the rescue workers, Wang knocked on the doors of his neighbors to wake them.

"The smoke became heavier when I descended and an apartment on the second floor was on fire. I stopped for a moment before continuing. I was determined to open the gate to let the firefighters in," he said.

Due to his heroism, all 11 households in the building emerged unscathed from the fire. Wang, however, suffered severe burns to 67 percent of his skin.

After multiple surgeries, Wang was discharged from the intensive care unit in September that year before receiving rehabilitation treatment.

"That was the first time I saw my body after the accident, and I literally collapsed," said Wang, who used to be an engineer at a foreign enterprise.

"I never expected that the rehabilitation would require such a long time and so much effort. It presented many challenges both physically and psychologically."

The first step was to practice sitting, which was difficult because his severely injured arms and legs were too weak. Standing on his feet was also a challenge as poor blood circulation meant it felt as if needles were piercing his soles.

The traumatic experience compelled him to start a charity initiative two years ago. It provides volunteer services for burns victims to alleviate their mental distress and help them feel included in society, and also holds safety education activities in communities and schools.

"We've made some short videos to popularize safety knowledge in interesting ways and are collecting funds to prepare special packages containing living necessities for such patients," Wang said. "These packages will include special tools to help them open water bottles."

He spends one day every month talking to patients in local hospitals who have undergone similar experiences, helping lift their spirits and boost their confidence.

Though local media have dubbed him "the hero in the fire rescue" for years, Wang said he has never regarded himself as a hero.

"I believe many individuals would instinctively do the same," he said. "If I had more safety knowledge, I would have wrapped myself with a wet blanket before rushing downstairs. The consequences would have been totally different."

Huang Junping, a former neighbor who still lives in the building that caught fire, said the hearts of all its residents are with Wang during his long rehabilitation process.

"We wish him a brilliant new journey in life and hope that he can start a family soon," Huang said.