SHANGHAI, Oct. 6 (Xinhua) -- As China International Import Expo (CIIE) is only a month away, Shanghai, host of the event, has reached the final stage of its preparations, while products from all over the world have been arriving in the city. 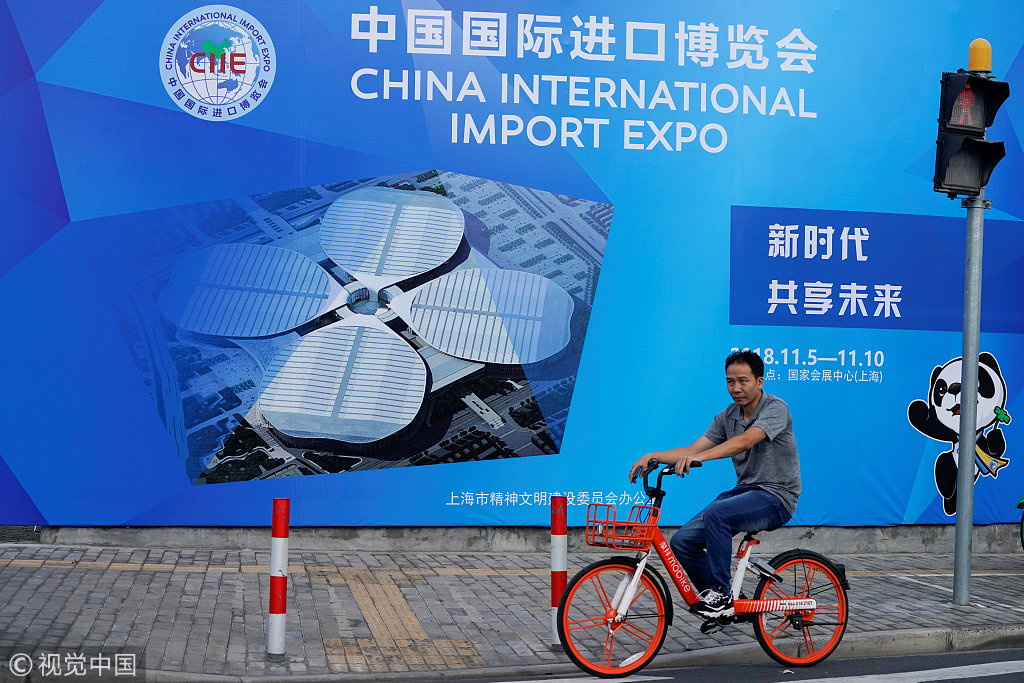 A man rides a bicycle near a billboard promoting the upcoming China International Import Expo in Shanghai. (Photo: VCG)

The CIIE is China's first expo event that is expected to give firm support to trade liberalization and economic globalization, and actively open the Chinese market to the world, according to its official website.

A total of 2,800 companies from all the G20 member states, as well as 50 countries and regions along the Belt and Road will participate in the expo.

Of the world's 44 least developed countries, more than 30 will be present at the event.

Shanghai has been holding rehearsals, improving city infrastructure and training volunteers to meet needs of the approaching event.

At the National Exhibition and Convention Center, where CIIE will be held, the event organizer held a comprehensive rehearsal on Thursday covering various scenarios.

Shanghai municipal government has been renovating the roads around the convention center, and developed cellphone applications to better guide traffic around the area. The city has also added eight bus routes and prepared 100 spare buses.

Light decorations have been added to the 20km-long banks of the city's signature Huangpu River, as well as four bridges that span across it. Hundreds of thousands of pots of flowers are dotted across Shanghai.

The city has trained 5,000 volunteers who will offer various services including language translations.

As the event is drawing near, goods from foreign exhibitors have arrived at local customs. Shanghai has opened green channels for the products, significantly cutting the time needed for them to be unloaded and stored in local warehouses.

So far, it is estimated that products from more than 1,500 exhibitors have arrived in the Chinese mainland, while that from another 1,000 have been or are being shipped.

Chinese companies are eyeing great potential in boosting imports through the event.

"During the CIIE, we expect to import at least 1,000 kinds of products and services that have not been sold in the domestic market," said Wang Zhe, Party head of China's commercial giant Suning Holdings Group, "In the next three years, we plan to import goods worth 10 billion Euros (around 11.5 billion U.S. dollars).

More than 100 new products and technologies are expected to make debut at the expo, according to statistics from the organizers.

Forty-three African countries have confirmed to participate in the expo. About 190 enterprises from Africa will promote local products such as Egyptian data palm, ethiopian coffee, and Amarula from South Africa, at the event, according to the organizers.

"The CIIE shows China's changing trade strategy and its resolve to fulfill its responsibility as a major country and achieve mutual benefits and win-win cooperation with all nations," said Zhao Beiwen, deputy head of the World Economy Institute under the Shanghai Academy of Social Sciences.