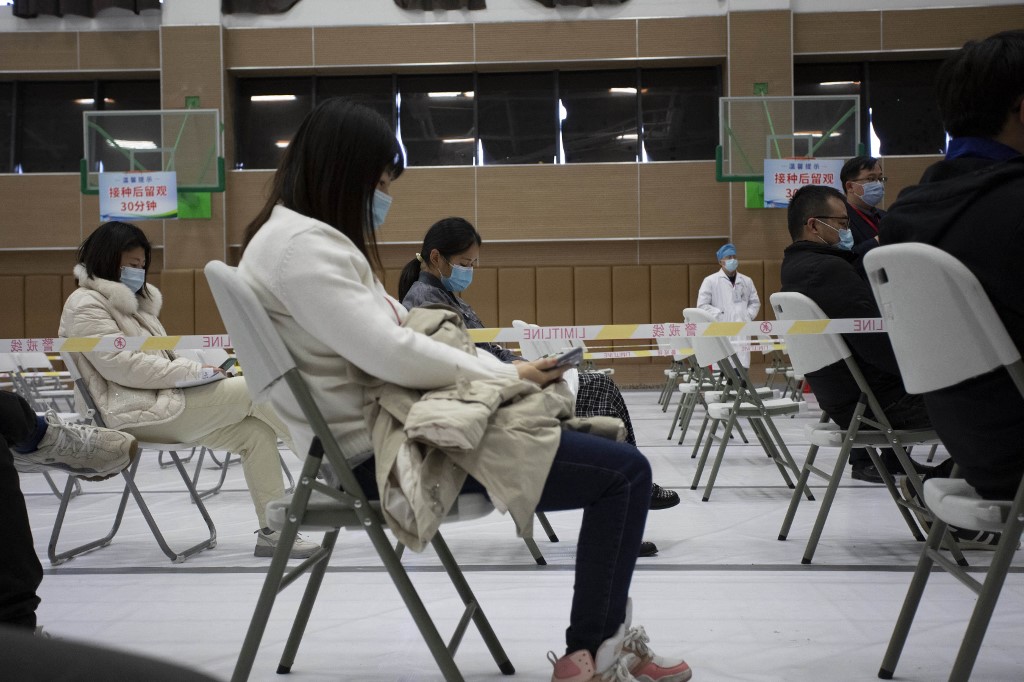 People wait on chairs after being inoculated with a Covid-19 vaccine at Jiading Stadium, a temporary vaccination site in Shanghai on January 19, 2021. (Photo: AFP)

Shanghai and South China’s Guangdong Province have expanded COVID-19 vaccine provision to residents from the island of Taiwan with the same treatment as locals, as the mainland accelerates mass vaccination and tries to develop herd immunity as soon as possible.

Since Monday, residents from the island of Taiwan in Shanghai aged between 18 and 57 have been able to apply for vaccination and they can get the vaccines for free, just like local Shanghai residents.

In Guangdong, online reservations for people from the island of Taiwan also opened on Monday. Teachers and students from Taiwan at schools in the province can get the same arrangements as their mainland counterparts.

Lee Cheng-hung, president of the Association of Taiwan Investment Enterprises on the Mainland (ATIEM), received a dose of COVID-19 vaccine at a community health center in Shanghai on the first day that the reservations opened.

"I was very much looking forward to this so I made a reservation immediately,” Lee told the media.
Both Guangdong and Shanghai, home to myriad Taiwan-funded companies and joint ventures, have registered a large number of investors, business representatives and their family members, as well as scholars, tourists, teachers and students from Taiwan.

The moves in Shanghai and Guangdong came after Ma Xiaoguang, spokesman for the Taiwan Affairs Office of the State Council, said on April 14 that people from the island of Taiwan on the mainland can get COVID-19 vaccines with the same treatment as their mainland counterparts.

Before the announcement, some of the people from the island of Taiwan living on the mainland who face a high risk from infection had already got COVID-19 vaccines during the country’s emergency vaccination program.

In Tianjin, residents from the island of Taiwan who work in the cold chain and logistics industries became the first group allowed to make appointments for vaccination in the northern port city in March, while all the more than 5,000 Taiwan compatriots in Tianjin have been able to register in their residential communities and with neighborhood committees for the vaccination since the beginning of April.