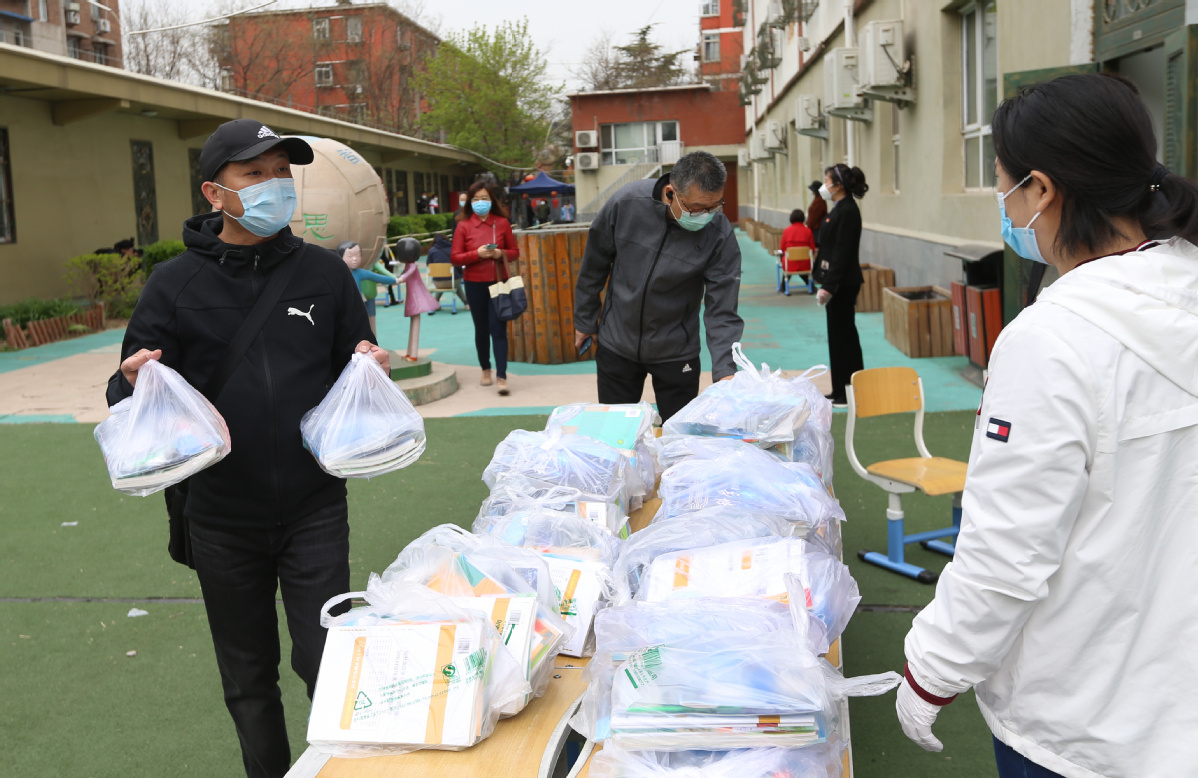 Parents pick up the textbooks for their children at a primary school in Beijing on Wednesday. Primary schools in Beijing will start online classes on Monday. (Photo: China Daily)

Education authorities in Shanghai and the provinces of Hebei and Guangdong announced dates to begin the new semester on Thursday, leaving only two provincial regions－Beijing and Hubei province－still undecided on when to allow students to return to school.

Shanghai's education authority announced on Thursday that some schools will reopen on April 27.

Lu Jing, director of the Shanghai Municipal Education Commission, said at a news conference that students in the final year of high school and middle school, as well as college and secondary vocational school students, will begin resuming lessons on April 27. The colleges and vocational schools should announce the date for the new semester after gaining approval from local education authorities.

Meanwhile, students in primary school and those in other grades in middle and high schools should be prepared to return after May 6. The education authority is still deciding on the specific reopening period for these students, Lu added.

"Students from primary schools and kindergartens are relatively weak in their ability to protect themselves, so they require more attention and better safety measures," Lu said. "We are being more cautious about their back-to-school dates."

The Hebei Education Department said on Thursday that senior high school students can return to school on April 23. For senior middle school and secondary vocational school students, the new semester will start on May 7.

The department has not announced the new semester opening dates for students at other levels of education.

Senior high school and middle school students in Guangdong can return on April 27, the Guangdong Education Department said on Thursday.

Shanghai, Hebei and Guangdong join other provincial regions in the country that have set dates for reopening schools, while parents and students in Beijing and Hubei are still not sure when the new semester will start.

Schools in Hubei will continue to delay opening until further notice, the local government said on Tuesday.

The commission said it would release the dates soon as parents and students grow more anxious over spending too much time at home.

"I never knew that having children at home all the time is so exhausting," said Wang Jing, mother of a middle school student in Beijing.

"Education departments assume there's one family member who doesn't work and can look after the child all day and help him complete education tasks, but this is totally unreasonable," she said, adding that they have passed the supervisory duty to his son's grandparents since she and her husband have both resumed working.