Shanghai in decisive battle against Omicron, admits being inadequately prepared for latest surge

Shanghai has been beefing up its COVID-19 prevention measures after a 3,000-official meeting on Wednesday night and vowed to adopt a strategy of what it termed "static management of the whole region," citywide nucleic acid testing as its officials admitted being ill prepared for the latest wave of fast-rising infections. 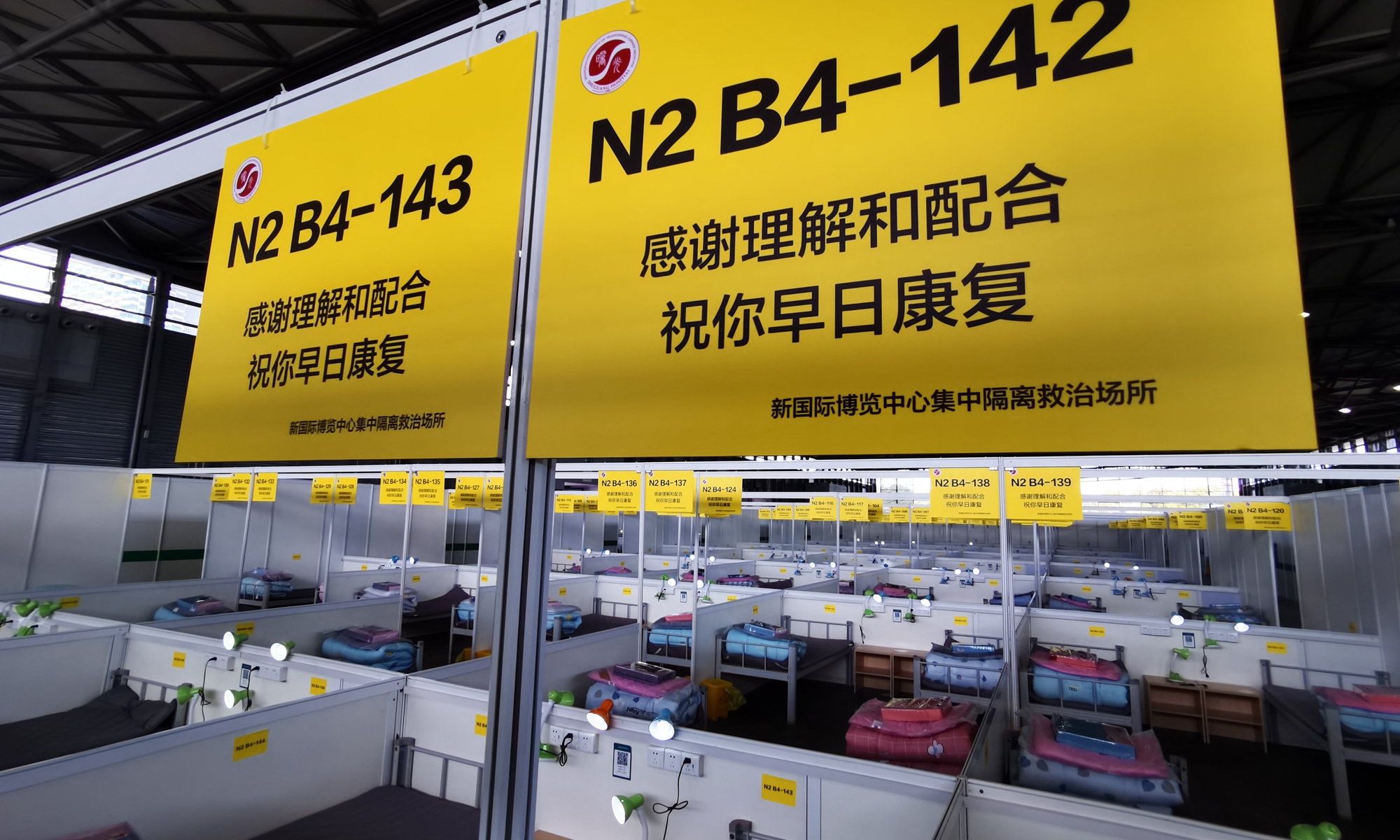 The Shanghai Pudong New International Expo Center is transformed into a quarantine center amid the soaring COVID-19 outbreak in the city on March 30, 2022. (Photo: VCG)

The financial hub has been battling with a COVID-19 outbreak caused by Omicron and its sub-variant since March, yet cases keep surging. Epidemiologists pointed out that Shanghai's previous targeted prevention approach appears to have fallen behind in the race against the highly contagious and more concealed Omicron variant, even though it helped the financial engine weather previous flare-ups without compromising economic growth.

Shanghai's current plight again proves that the dynamic zero-COVID policy is the most suitable strategy for China in the current battle with Omicron. When the infection curve has been flattened, the financial center will continue explore the targeted antivirus measures, and it is urgent for China to find a way in striking a balance between COVID-19 control and economic growth, said experts.

Ma Chunlei, secretary general of the Shanghai government, admitted at a daily news conference on Thursday that Shanghai was ill prepared for the latest surge in infections, had not developed sufficient knowledge about the highly contagious Omicron variant, and its control measures have not been up to speed. He said the municipal government accepts criticism and vowed to improve.

His comment comes after Li Qiang, Party chief of Shanghai, said during a video meeting on Wednesday that Shanghai is now in the most difficult and key stage of the COVID-19 fight, and every hour and minute counts. The official said that Shanghai will resort to static management of the whole city, carry out city-wide nucleic acid testing to round up at-risk groups and staunch viral infections within the community as soon as possible.

In an open letter released on Thursday morning, the Shanghai government said pandemic prevention and control and the residents' well-being have been the city's top priority. Shanghai has been following Chinese President Xi Jinping's instructions and the policy of "people first, life first."

Meanwhile, the city is trying its utmost to achieve the dynamic zero-COVID goal by controlling imported COVID infections and preventing the existing infections from rebounding, the open letter said.

The plea for patience came as the Chinese financial hub, home to 24 million people, said its overall daily COVID caseload eased for the first time in about two weeks as the city entered the fourth day of a two-stage lockdown.

More than 80 percent of the new cases detected in the past week were identified within the quarantined area. Shanghai has reported more than 30,000 COVID-19 cases since March.

During the phased lockdown, Shanghai also met with plights as were emerged in previous lockdowns in other cities, such as difficulties of buying food and getting medical treatment.

Ma said at the conference that all city-level hospitals will be open for residents to ease problems of accessing medical treatment for other diseases. Officials also vowed a steady supply of food and other life necessities.

Starting on Friday, Shanghai will kick off mass testing for the other half of the city across the Huangpu River. Puxi district accommodates 16 million people. Ma asked residents to keep support their work as the next stage of mass testing involves more people in wide scope.

Shanghai government said on Thursday that the Pudong area will still undergo categorized and grid management. Buildings where positive cases were detected will still be sealed off. The government previously said it would lift the closed-management in Pudong on Friday. 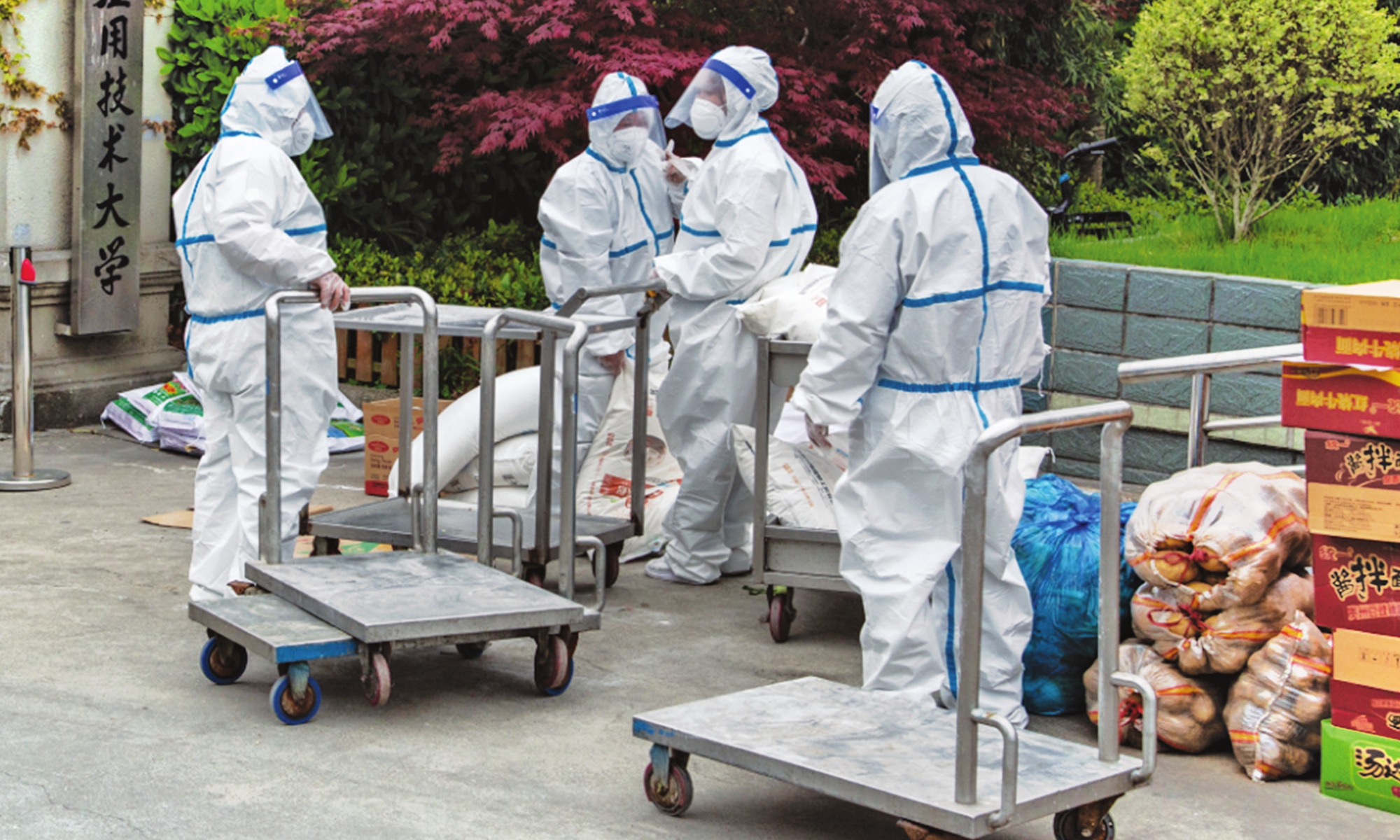 Shanghai is now in a decisive battle with COVID-19 as the city's mass nucleic acid testing program is rolling out, said Liu Yu, a researcher from the School of Public Health at Peking University, also a member of the expert team dispatched by the central government to assist Shanghai. She noted that Shanghai previously used relatively relaxed targeted measures, thus the city lacks experience of mass testing, and such measures result in delayed treatment of patients.

Talking about Shanghai's experience and lessons learned from the latest response to Omicron, Chen Xi, an associated professor of public health at Yale University, told the Global Times on Thursday that as the virus has spread much faster than epidemiological investigations and many people are asymptomatic, it poses great challenges for the city's precise anti-epidemic strategy.

"I don't think Shanghai will resort to a full-scale lockdown like we did at the early stages of the outbreak, but it has to accumulate experience and come up with more precise measures," Chen said.

Shanghai, China's finance and international business hub, and also home to the world's largest container-shipping port, has shunned citywide lockdowns. Wu Fan, an expert from Shanghai's anti-epidemic leading expert team said on Saturday, "not only is it a city of its own residents, but also a city with a very important role in China's economy and social development and it also has an impact on the global economy."

Economists predicted the stringent measures will exert somewhat of a cost on Shanghai's GDP in the first quarter, yet the loss will be swiftly compensated once the metropolis bounces back to normal, Tian Yun, vice director of the Beijing Economic Operation Association, told the Global Times.

"The real ordeal is how to strike a balance between pandemic control and economic growth during the later waves to come," Tian said, adding that repeated lockdowns and continuing stringent measures will impact the economic growth plan outlined by the 14th Five-Year Plan (2021-25).

Most countries in the world have already or are planning to ease their COVID-19 restrictions soon. The economist believes another puzzle for metropolises such as Shanghai and Shenzhen is how to resume much smoother connection with other countries, which is an important stimulating component for those cities' economic recovery.

Currently, the Omicron subvariant BA.2 raises much uncertainties as it has become the dominant variant in the US and Europe. In the US, the rate of hospitalization has declined, but in the UK, it is increasing, Chen noted. "What China hopes to do is to curb the peak of the outbreaks and clear all the infections as soon as possible so it can do more preparations in terms of medical treatment and vaccines," he said.

As China is now battling with its most serious COVID-19 outbreak in two years, many Western media also questioned whether Omicron will force China's hand regarding its current dynamic zero-COVID strategy.

Yet relenting from zero-tolerance would bring extraordinary challenges to China, as the country's medical system has not yet prepared for shocks of surging numbers of infections and the vaccination rate of the elderly group is relatively low, said a Beijing-based immunologist, who required anonymity.

Ma Xiaowei, head of the National Health Commission, said in an article released on Wednesday night that amid the epidemic resurgence, some places concluded that the Omicron variant leads to mild symptoms, appearing to be like the flu. So they dropped their guard and relaxed their anti-epidemic work and emergency response. "If we don't have preventive measures but only focus on medical treatment, our medical system would face the risk of collapse," Ma said.