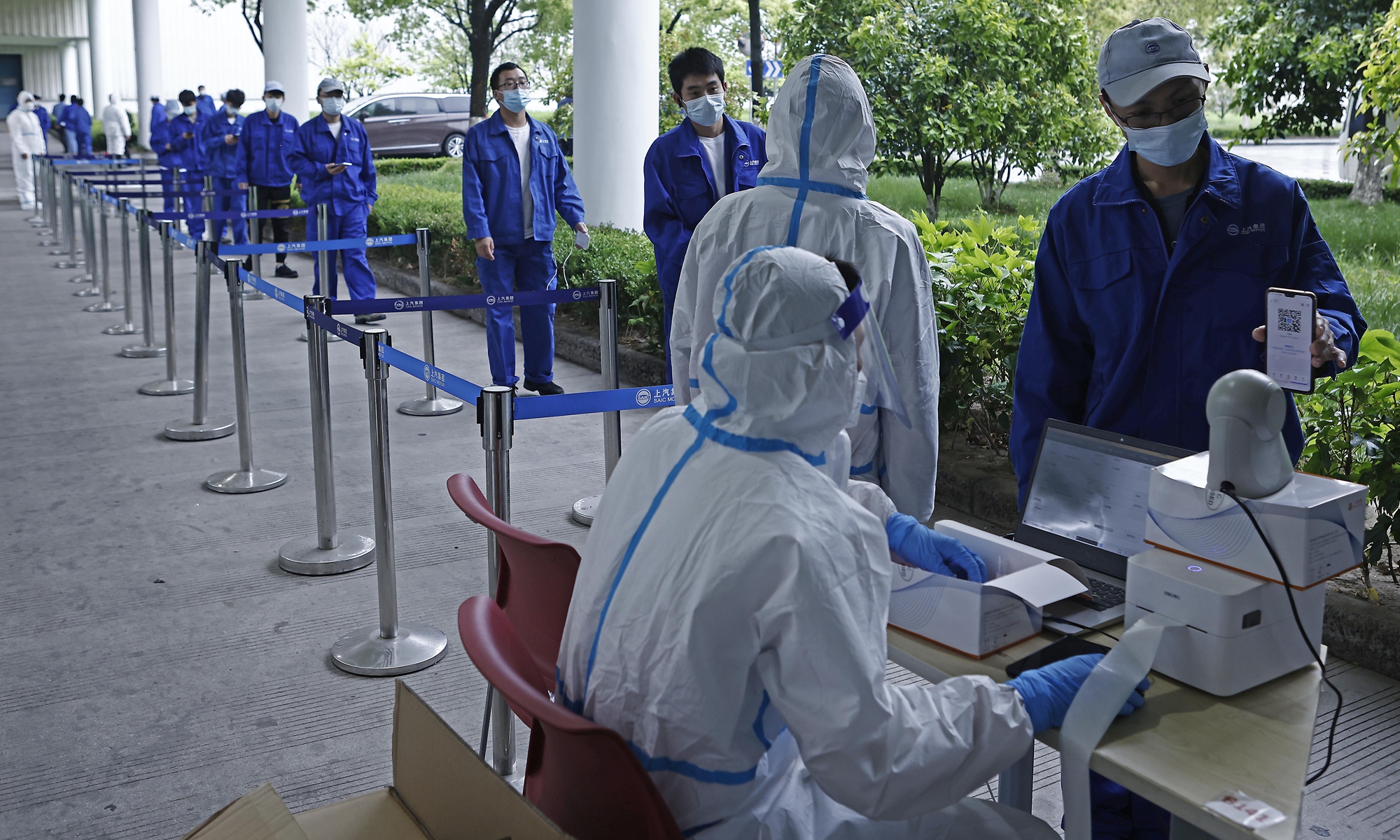 Staff at SAIC Motor's Lingang plant in Shanghai line up to register before nucleic acid testing on April 23, 2022. More than 4,000 employees face closed production. A lot of key firms have resumed work and production in the city. (Photo: CT)

Shanghai on Saturday reported 2,736 new COVID-19 confirmed cases and 20,634 asymptomatic infections, a reversal from consecutive drops, which cast a shadow on the city's arduous anti-epidemic efforts which entered a "decisive battle" to stamp out infections within communities starting Friday.

Fluctuations in cases are foreseeable when overall infection rates are high, and the large number of asymptomatic cases found in controlled areas, where residents are requested to stay put, indicated that community transmissions have not been curbed and the city should close remaining loopholes within communities to win the decisive battle, health experts said.

Media reported on Saturday that Shanghai has started to refit some makeshift hospitals, which used to accommodate people with mild or no symptoms, to make those facilities capable of providing care for common types of patients who have risks of developing more severe symptoms.

Shanghai's priorities in epidemic control remain doubling down on quarantine and "static management" measures in residential compounds and more intensive care and treatment of people at high risk of developing severe symptoms, experts said, acknowledging the megacity of 25 million has extra pressure of resuming production as soon as possible.

Shanghai's situation has again prompted challenging voices to China's dynamic zero-COVID policy, but Liang Wannian, head of the COVID-19 response expert panel under China's National Health Commission (NHC), said in a Friday interview that costs of the control strategy, including vaccines, nucleic acid tests, makeshift hospitals and manpower, are "worthwhile investment" which is equal to "buying insurance" for the 1.4 billion people against the risks of Omicron.

Liang also stressed the essence of precise control not only means methods to tackle the COVID-19 are targeted, but also indicates a precise balance between epidemic control and economic development, which should be mutually reinforcing rather than jeopardizing.

The problems that emerged in the epidemic-control process, like difficulties in getting daily necessities and non-COVID medical services, must be tackled and the control measures should be implemented in a more caring manner, he said.

Vice Premier Sun Chunlan, who is inspecting the epidemic control in Shanghai, on Saturday urged relevant work to be quicker than virus spread and stressed enhanced testing organization and better coordination in makeshift and designated hospitals to boost efficiency of treatment. 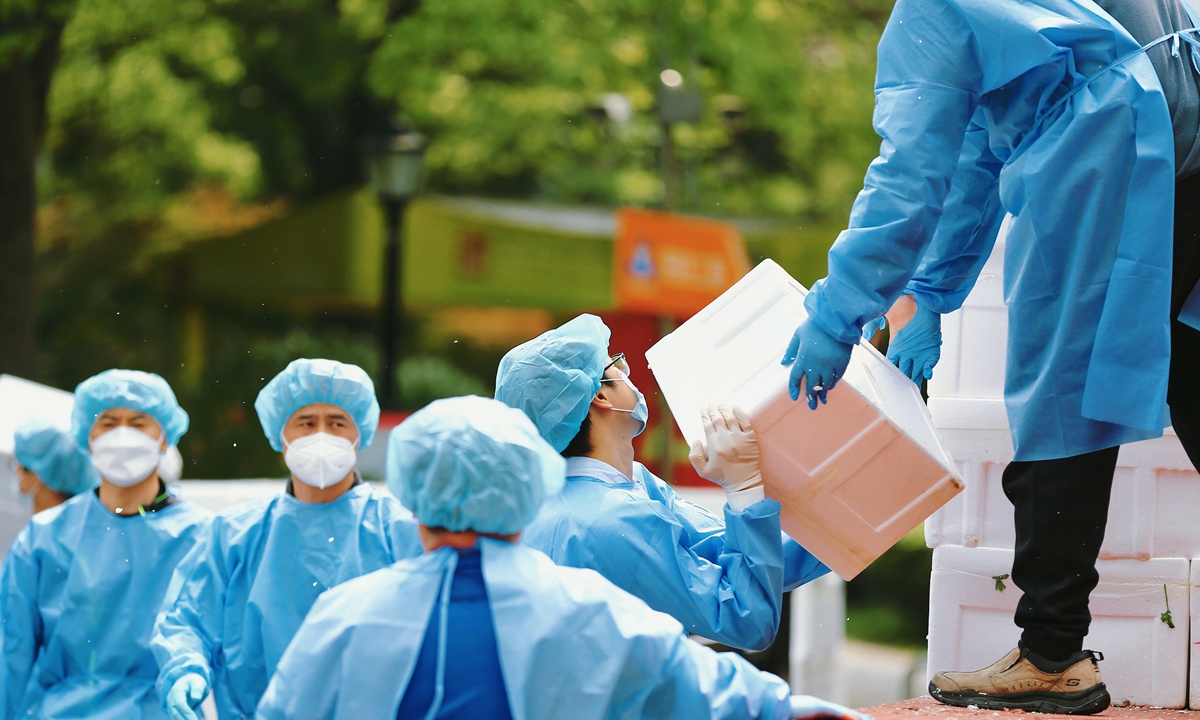 Such a data pattern indicated community transmission had not been effectively curbed, according to Lu Hongzhou, head of Shenzhen's anti-epidemic expert team and the Third People's Hospital of Shenzhen.

Lu told the Global Times on Saturday that in communities, there are high risks of infection during nucleic acid testing where one can infect many via aerosol, and the distribution and delivery of essential goods also pose risks.

A Beijing-based immunologist told the Global Times on condition of anonymity that unlike previous virus-hit cities that saw a sharp rise and gradual yet steady drop of infections after strict controls and mass tests, Shanghai's daily tallies didn't spike but remained at high levels for weeks - demonstrating the danger of Omicron and requiring more effective measures.

Shanghai on Friday announced a "decisive battle" in communities with measures to enhance epidemic prevention and scale up tests. A new round of testing has also been announced specifically for different districts.

Shanghai resident Li Cuihua, who lives in a community under static management, told the Global Times that her community issued a notice on Thursday night saying the volunteers would come door to door to do nucleic acid tests for the residents in the next five days.

Catherin You, a Shanghai resident, told the Global Times that Jingan district, where she lives and residents were previously allowed to walk outside the community, upgraded its restrictions on Thursday asking its residents not to leave the compound and stay put at home, and only to go downstairs to get food and other life necessities.

The plan also stipulated that alerts can be installed at doors for people under home quarantine to record if they go out.

Shanghai's newest measures of expanding testing and doubling down on quarantine measures will serve the goal of containing viral infections within communities by early May, Chen Xi, an associated professor of public health at Yale University, told the Global Times on Friday.

He also pointed out the hidden danger of infections during mass testing.

The city has adopted antigen self-tests to reduce infection risks during group nucleic acid testing as much as possible, but there remain other loopholes, experts said.

The city's health authority said during Saturday's press briefing that the rise in infections was connected to cluster infections in older residential compounds where people share kitchens and bathrooms, as well as construction sites and some companies.

Epidemiologists pointed out that treatment of severe cases will be another focus in Shanghai's COVID-19 battle, as the city sees increasing numbers of severe cases and deaths in recent days.

Twelve more deaths were reported on Friday at an average of 88 years old. All of the 12 patients were unvaccinated and had existing underlying conditions including heart diseases and hypertension, Wu Qianyu, an official from the Shanghai health authority, said at the press briefing.

The city has 157 severe cases and 18 people in critical conditions as of midnight Friday, compared with 184 and 24, respectively, the previous day.

The Shanghai New International Expo Center (SNIEC), which was converted into a makeshift hospital in early April with a capacity of 15,000 beds, has been refitted with eight emergency rescue rooms. On-site construction workers wore protective suits rather than just masks, given previous infections traced to makeshift hospital construction. 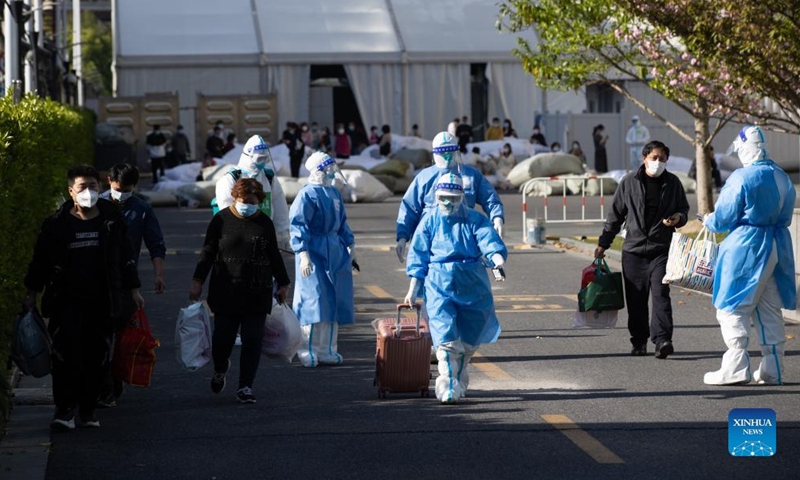 Four makeshift hospitals including the SNIEC, are replacing some of the normal beds with medical beds and installing more medical equipment such as CT machines and blood analysis machines to provide more intensive care and treatment for patients, Xinhua reported Saturday.

Lu said the refit aims to provide better care and necessary treatment to infected people in the makeshift hospital. Though people who live in makeshift hospitals are mainly mild- or non-symptomatic cases, there is a possibility that their situation could deteriorate quickly and require intensive care, taking into account Shanghai's older population, Lu said.

The Beijing-based immunologist said medical resources were concentrated in nucleic acid tests when the outbreak started, and along will the development of the epidemic, resources can be distributed more to the treatment of existing cases and preventing them from developing more severe symptoms.

As static management is prolonged, it is crucial to ensure the daily needs of city residents while figuring out ways to resume production in key industries.

City officials said on Saturday that the daily capacity of necessities delivery has doubled from a week ago with the coordination of shopping malls, e-commerce platforms and small stores in communities. The government also vowed to resort to quick and strict measures to crack down on those providing poor-quality commodities.

For delivery people who have to work outside, Changning district provided 18 courier sites for them to live, rest and receive epidemic control management. E-commerce platforms have been asked to organize 10 percent of their delivery workforce to receive nucleic acid and antigen tests every day to ensure safe operations.

With enduring control measures, garbage processing has surfaced as a new challenge. Processing capacity dropped because 54 percent of the city's sanitation workforce are off and garbage is piling up in a number of residential communities under special controls due to positive cases. City authorities vowed the quick resumption of sanitation work to tackle the problem.

Shanghai deputy mayor Zhang Wei said Friday at a press briefing that 70 percent of the 666 enterprises including SAIC Motors and Tesla, on the "white list" of key firms, have resumed work and production in the past week, and their production capacity is also increasing.

The companies have to satisfy certain requirements, including asking key staff to live within closed-loop management, to avoid contact with outsiders and reduce transmission risks. The companies are also required to set up quarantine sites just in case.

Though the 666 companies account for a small proportion of numerous businesses prospering in Shanghai before the virus hit, the partial resumption sent a positive signal of hope, observers said.