Shanghai leads China's use of open data in smart city development with over 4,000 items of government data available to the public, according to the 2020 Smart City Expo World Congress, which held its branch expo in Shanghai for the first time with a slew of new technologies and applications in smart city construction from across the country on display. 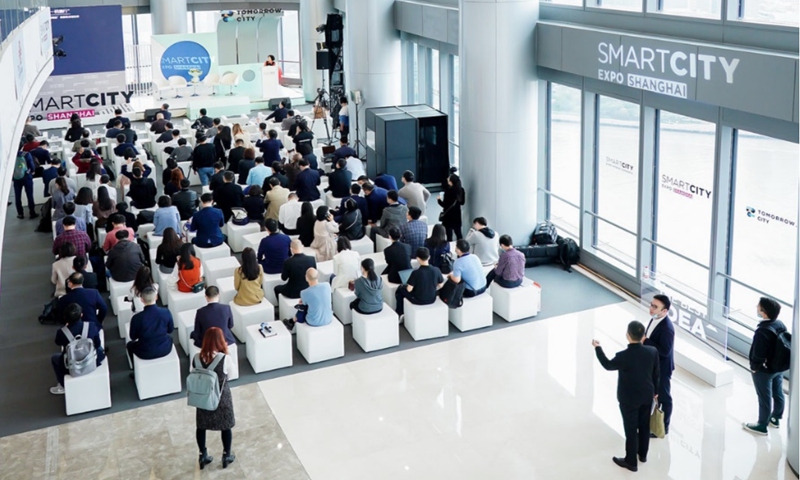 The 2020 Smart City Expo World Congress held its branch expo in Shanghai for the first time on Tuesday. (Photo: Courtesy of the organizer)

Statistics released by the Shanghai Social Credit Promotion Center at the event held on Tuesday and Wednesday showed that with over 4,000 items of public data available to the public, Shanghai ranked first for the third time in a row among local governments in China. These data come from the major fields of 44 city-level government bodies.

Statistics from the Shanghai Municipal Commission of Economy and Informatization released at the event show that Shanghai's index of smart city development level reached 105.85 as of 2019, up 8.21 from 2016. The development pattern of smart city has basically taken shape in Shanghai, with obvious and intensified convenience to local citizens.

Mao Huidong, CEO of Smart City Expo World Congress in China, told the Global Times on Wednesday that the smart city development level of Chinese cities takes the relative leading positions across the world in general.

As a case of intelligence traveling, Dunhuang in Northwest China's Gansu Province showcased its smart management in controlling traveler flows during peak and off-peak periods. Chengdu in Southwest China's Sichuan Province takes a "park city" model as the core factor in its smart city development, specializing in a green and ecological city. Shenzhen, on the other hand, takes digitalization as its specialty in smart city development.

According to Mao, the event organizer has inspected different cities and areas across the nation throughout the past nine years. Since Shanghai has the highest level of openness and is more accepted internationally, the branch expo of the event was set up there for the first time.

This year, the event is also being held in its major venue of Barcelona, Spain, and branch venue in New York, the US, at the same time. From 2021, a Shanghai summit of the annual event will take place in the municipality every year.