CHINA Shanghai man makes the most of quarantine

Shanghai man makes the most of quarantine 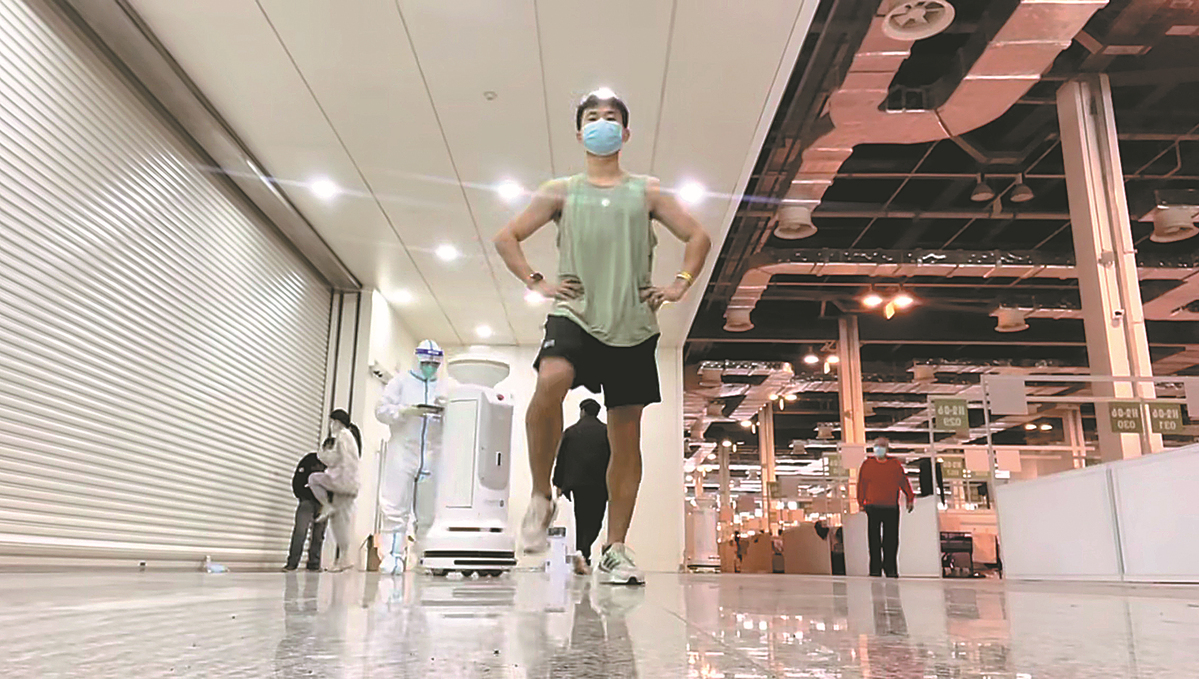 Zhao Jun sticks to his workout regime at a makeshift quarantine facility at the Shanghai World Expo Exhibition and Convention Center. Photo provided to China Daily

Jogging, reading, drinking coffee and recording vlogs are all part of Zhao Jun's daily routine during his medical quarantine in Shanghai after being diagnosed with COVID-19 on March 20.

The 27-year-old man recorded his experiences over the past 10 days in videos made into vlogs before posting it all on his Xiaohongshu account. He has been sharing his quarantine conditions, meals, daily workouts and interactions with medical staff and volunteers.

There is no feeling of tension or depression in his vlogs, but a positive attitude expressing his understanding and gratitude. "Everyone is working very hard. I hope we can be more patient with the medical staff," he said in the vlog.

Zhao, who was diagnosed as a confirmed COVID-19 case with mild symptoms－including a cough and slight fever－was initially sent to the quarantine ward in Tong Ren Hospital on March 21. Then he was moved on Tuesday to the Shanghai World Expo Exhibition and Convention Center, one of the largest central quarantine sites for COVID-19 cases with mild symptoms and asymptomatic infections in the city.

As a frequent gym visitor who usually exercises two hours a day, he felt his current situation still allowed him to continue his daily workout routine, including a five-kilometer run and 20 minutes of aerobics.

"I used to be a 75-kilogram lazy person who didn't like exercising at all. However, I became determined to lose weight three months ago and maintained the habit of regular exercise. I am now about 63 kg," said Zhao, who was born in Hunan province and moved to Shanghai recently.

"Just like people need to eat and sleep, exercise is part of my routine," he added.

However, it was also the workout that might have caused his infection.

"I can basically speculate that I was infected in the gym. There was a confirmed case found there before me," said Zhao, pointing out that gyms might be easy for the virus to spread since people don't wear masks while exercising indoors.

"I found that three of the seven people sitting with me on the transit bus to the medical quarantine center had been exercising in the same gym," he said.

Zhao didn't give up exercise even in the small quarantine ward at the hospital.

"The length of the ward where I can move about stretches only about four meters. I was running back and forth with headphones on," he said.

On Sunday, Zhao was moved along with other 50 confirmed cases to the exhibition center for medical quarantine and he is quite happy to see he now has a larger space to work out. On Wednesday, he ran 12 km in a corner of the center, which was the longest distance he had completed recently.

Sometimes other patients join him in workouts. He also noticed that more and more people began to exercise, such as practicing tai chi, taking walks or kicking shuttlecocks.

"I used to exercise to lose weight but now it's to boost immunity and strength, as I hope to have a negative nucleic acid test result as soon as possible," he said.

Zhao's original intention to post vlogs was to do something meaningful during the quarantine period and avoid wasting time.

He has received many compliments from netizens and also found that many people still have questions and anxiety about COVID-19, so he decided to keep uploading his experiences.

"This was especially true when I saw a private message to me saying: 'Thank you for your vlog sharing. It lets me understand the medical quarantine process of COVID-19 and get past fear of the virus'," Zhao said.

"Do not panic when your nucleic acid test is positive. You may need to prepare personal items, including personal hygiene products, medicines, clothes, chargers, books or some entertainment equipment."

On Tuesday, Zhao's nucleic acid test result came back negative for the first time. Now, Zhao is waiting for two more negative test results and a doctor's diagnosis before being cleared to return home.