A 214-member medical team from Shanghai Huashan Hospital Affiliated with Fudan University which was dispatched to Wuhan has received a letter of gratitude from unnamed residents living in the epicenter of the novel coronavirus pneumonia outbreak. 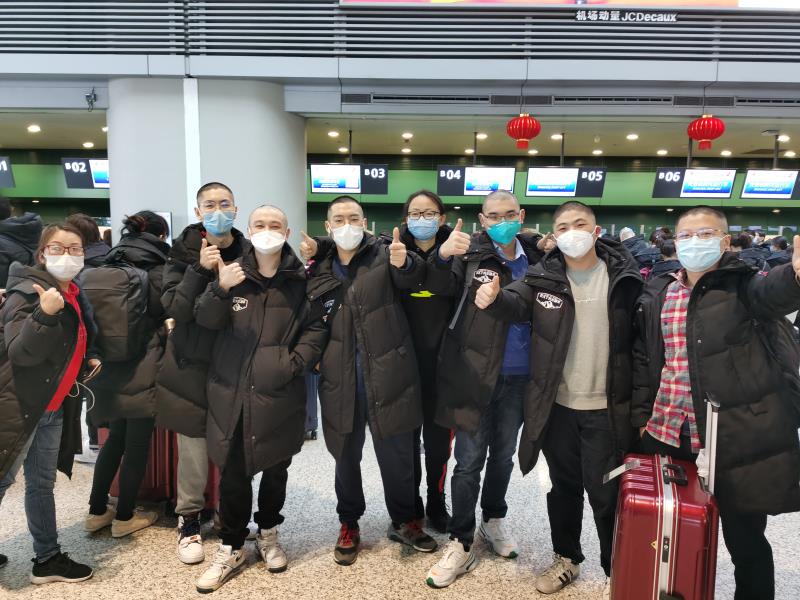 A 214-member medical team from Shanghai Huashan Hospital Affiliated with Fudan University left the municipality for Hubei province’s Wuhan city, the epicenter of the novel coronavirus pneumonia, on Sunday. Before leaving, many men doctors had their heads shaved while women had their long hair cut into a boyish crop. (Photo: China Daily)

The medical team has since Monday been treating patients in intensive care units in the Wuhan Tongji Hospital.

"Respected doctors and nurses from Shanghai, you are the most beautiful people going in the opposite direction of many others. We'll always remember that you came to support Wuhan and risked your lives to protect ours," read the letter, which the team received on Tuesday.

"We hope every one of you will protect your own safety and health while working in Wuhan."

Residents also wrote in the letter, which was delivered together with at least 170 boxes of fruits and milk, that Wuhan seems to have "hit the pause button" for the time being.

"On the day Wuhan presses the play button, we Wuhan people will invite all those who provided help and their families to enjoy the beauty of the city, the Yangtze River, the cherry blossoms and our delicious food," read the letter.

Presently, Huashan Hospital has sent the largest contingent of doctors and nurses to support Wuhan's fight against the NCP outbreak, said Ding Qiang, president of the hospital, which is affiliated with Fudan University in Shanghai.

Ding added that prior to the departure of the latest 214-member team, the hospital had already sent 54 medical workers across three batches to work in three hospitals in Wuhan.

The average age of the latest batch of medical personnel is 32, and more than half of them were born in the 1990s, according to the hospital.

Doctors and nurses lined up in the hospital lobby to have their hair cut before their departure from Shanghai on Sunday. Most men had their heads shaved while the women had their long hair cut into a boyish crop.

"Such hairstyles are more convenient for us as we'll need to put on medical protective clothing and other protective equipment when working in Wuhan," said Zhang Yeqi, a male nurse from the hospital.

As of Tuesday, a total of 1,430 Shanghai doctors and nurses specializing in different disciplines, including critical medicine, respiration, infectious diseases and nursing, have arrived in Hubei province to provide medical support.