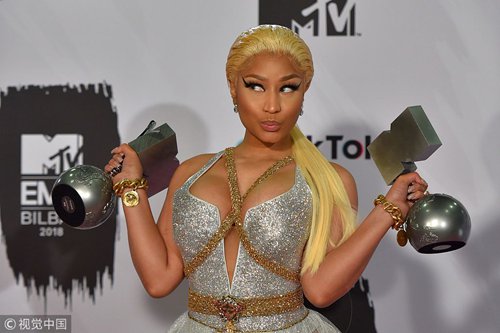 US rapper Nicki Minaj poses backstage with her awards during the MTV Europe Music Awards at the Bizkaia Arena in the northern Spanish city of Bilbao on November 4, 2018. (Photo:VCG)

Organizer of a Shanghai music show said Monday it condemns Nicki Minaj for being late to the Sunday show and refused to perform. But fans who waited two hours are suspecting the show is "a scam."The celebrity rapper was allegedly scheduled to perform in Shanghai on Sunday as part of the DWP China music festival. But when it came to her turn, she did not appear.DWP stands for Djakarta Warehouse Project, an annual dance music festival that usually attracted top acts from all over the world."Minaj failed to arrive on time, which severely delayed the show. After she arrived, she still refused to perform despite fans clamored for her and the organizers negotiated with her for two hours," Yatai Huaying, a Chengdu-based company and the show's organizer, said on Sina Weibo on Monday.It said it strongly condemns Minaj's behavior and will give the fans a refund.The event's website dwpchina.com, however, put up a notice saying that "the event rumored to take place in Shanghai on the 17th & 18th of November 2018 is an unauthorized use of the DWP trademark. DWP as a brand has no association with the event. The alleged lineup artwork of DWP China, which has been circulating online, is unauthorized."Many of Minaj's fans were seen on videos posted on Sina Weibo on Sunday leaving disappointed. But none of them blamed Minaj. Instead, they said Minaj did not perform because the show was a scam to trick her to show up.Some even said the refund is not enough to compensate their sadness. Minaj could not be reached for comment by the Global Times. She said in a video, "Thank you, guys. To my real fans, I love you so much." "I'll be back for my real fans, in Shanghai, in China. I love you so much… And I'll be back with a better partner."