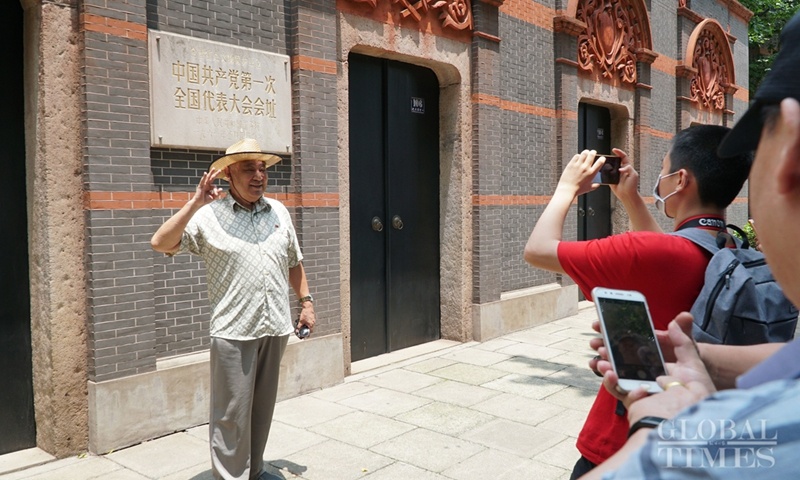 Chinese people from around the country make their way to the site where the first CPC National Congress was held in Shanghai in 1921 to learn about the Party's noble spirit on July 1, 2020. (Photo: Lu Ting/GT)

Three deputies to the National People's Congress (NPC) from Shanghai, the birthplace of the Communist Party of China (CPC), coincided in their proposals on the legislation of inheritance, promotion, protection and utilization of "Red Relics," or revolutionary sites, during this year's two sessions on the occasion of the centenary of the founding of the Party.

Liu Yan proposed stipulating the contents of the protection of Red Heritage and duties and obligations of the local governments through legislation after she noticed that insufficient attention was being given to the protection of Red Relics, and the system and mechanism of centralized management needed to be improved.

Chen Jing, another NPC deputy, also pointed out that due to historical and practical reasons, some red sites, historical ruins, memorial facilities with historical value, and red resources such as important archives, documents and physical objects had not been included in heritage lists and there was no law for their protection.

Legislation related to Red Relics has been initiated in many places across the nation, such as East China's Shandong Province and North China's Shanxi Province, said NPC deputy Gao Yun

Local legislatures can take measures according to concrete conditions, but that would also lead to inconsistent positions and content, said Gao, proposing the acceleration of national laws and regulations and integration of local practices through top-level design to solve the problem of "fragmentation" of local legislations.

A draft regulation on the inheritance, promotion, protection and utilization of Red resources, which was listed as an annual legislative project in Shanghai this year, began soliciting public opinions on March 3.

Gao thinks a most important thing in the early stage is to carry out rescue and emergency protection, as many Red Relics have been in existence for quite a long time and are on the verge of extinction.

Chen pointed out that some grassroots Red sites are faced with funding, personnel and other problems. He suggested increasing financial input and personnel training for grassroots revolutionary sites and attracting more high-quality talents to the cause of inheriting and protecting red heritage.