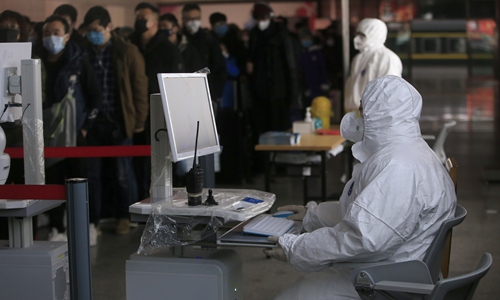 Shanghai municipal government briefed media on its prevention and control of the novel coronavirus on Monday afternoon.

As of Sunday, Shanghai had confirmed 53 novel coronavirus infections including one death, one recovery, two in critical condition and 49 in stable condition. Among them, the oldest is 88 and the youngest 7. By 3 pm Monday, 57 suspected infections have been dismissed and 90 suspect cases are still under observation.

Among the 53 confirmed novel coronavirus infections in Shanghai, 20 lived in Central China's Hubei Province, 21 had traveled to the region, while the remaining 12 had come into contact with confirmed infected individuals.

A total of 9,804 people are under observation for possible coronavirus infection in Shanghai, including 8,706 under home observation and 1,098 in collective isolation.

Authorities have ordered that local enterprises should not resume work before 12 pm on February 9 except for those industries critical to the sustainment of the city such as utilities and communication and industries ensuring residents' daily life such as supermarkets, food production, and supply. Additionally, industries related to epidemic prevention and control, including the medical, pharmaceutical and environmental protection sectors should resume work as well.

Schools including universities, high schools, primary schools, vocational schools, kindergartens, and nursery schools will not start the new semester prior to February 17. Any teaching activities and gathering activities including training at cram schools should be suspended pending further announcements.

Thorough screening has to be carried out among all the students and teachers returning to Shanghai from other provinces, especially university students from key infected areas, the Shanghai Education Commission noted.

Since Sunday, the temperatures of all flight passengers have been taken upon arriving at Shanghai's two airports. Those who show abnormal temperatures will be sent directly to nearby hospitals for treatment. Similarly, temperatures are being taken for railway passengers as well.

All inter-provincial buses between Shanghai and other provinces and the section of Shanghai's metro line connecting Shanghai and Jiangsu Province have been suspended since Sunday. Starting from 2 pm on Monday, all vehicles entering the city through nine provincial boundary checkpoints will be stopped and medical staff will take temperatures of all passengers and check their ID cards.

Production capacity and inventory of relevant enterprises in Shanghai have been thoroughly checked and supply has been expanded by releasing emergency supplies, requisitioning in accordance with laws. Relevant enterprises are to resume production and imports to stabilize the market and ensure medical treatment.