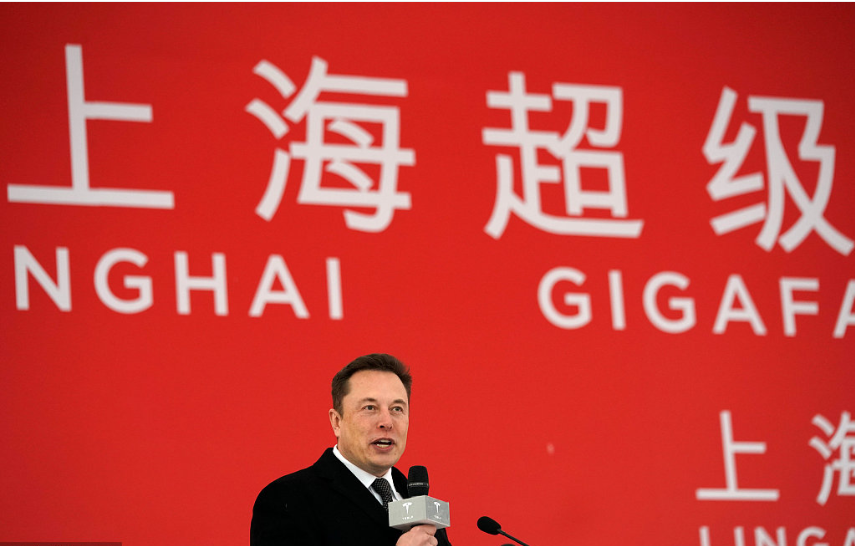 Tesla Inc recorded several firsts when it broke ground on a car manufacturing plant in Shanghai on Monday afternoon. The 50 billion yuan ($7.3 billion) plant is the company's first factory outside the United States and the first automobile production project wholly owned by foreign capital in China.

Analysts said the move marks the strong confidence the new energy vehicle maker has in the China market as well as China's commitment to further opening-up.

"Gigafactory" is a term that originated with Tesla's planned battery production per year of 35 gigawatt-hours, according to Zacks Investment Research.

"With the resources here, we can build the Shanghai gigafactory in record time. We are looking forward to hopefully having some initial production of the Model 3 toward the end of this year, and achieving volume production next year," Musk added.

Musk said he expected the plant to finish its initial stage construction in the summer. Its goal is to have a production capacity of 500,000 vehicles per year.

The Shanghai factory came together after China announced in April it would remove the cap on foreign ownership of companies that build new energy vehicles. China also decided to phase out the equity cap on all automotive ventures by 2022－widely considered one of the most far-reaching moves in decades to open up its car market.

Yale Zhang, managing director of Shanghai-based consulting firm Automotive Foresight, said Tesla's Shanghai plant sends another clear signal of the country's intent to further open up to the world. "China said it and has kept its word."

China's new energy vehicle market has kept growing robustly, while the country's auto market as a whole has been tepid.

In the first 11 months of 2018, China made about 1.05 million new energy vehicles and sold 1.03 million, according to the China Association of Automobile Manufacturers. That's an increase of 63.63 percent and 68 percent year-on-year, respectively.

In the same period, the production and sales of automobiles in China were 25.33 million and 25.42 million, down 2.6 percent and 1.7 percent.

"It is widely projected that China's new energy vehicle sales will reach 1.2 million in 2018, accounting for nearly half of the global market. In 2019 and 2020, the sales of new energy vehicles will maintain the upward trend," said Sun Naiyue, an industrial analyst with research firm Analysys.

Market expectations are based on China's decision to open further and China's demand for automobiles, analysts said.

The arrival of Tesla is expected to cause weaker companies in China's new energy vehicle market to improve their competitiveness, Zhang said. "If Tesla's locally produced cars are priced in the same way as in the US, they will force other companies to cut prices and improve quality, thus benefiting the segment as a whole."