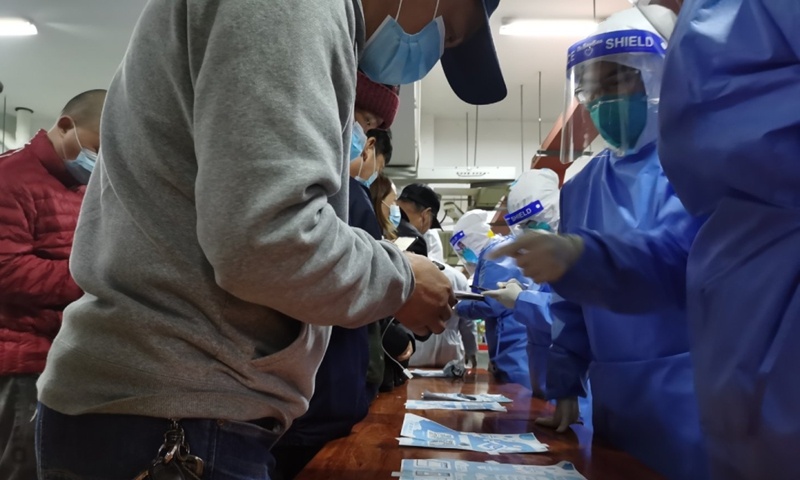 After overnight nucleic acid tests on more than 17,700 people working in the Shanghai Pudong International Airport, the busy transportation hub where seven COVID-19 cases were found returned to normal on Monday.

Experts noted that what happened in the Pudong airport reflects China's speed in dealing with the COVID-19 outbreak, but also hints at increasing risks brought by none-frozen goods and cold-chain products imported from overseas that the country has faced, especially in its port cities.

Since seven COVID-19 cases were found to be related to a cargo business at the Pudong airport since November 9, airport authorities arranged tests for people working there. As of press time on Monday, the airport has arranged nucleic acid tests for 17,719 people, with one coronavirus-positive case.

The new case is a male working at the container freight station of FedEx at the airport. Risk for the residential community he visited has been lifted to medium level, Shanghai authorities said. 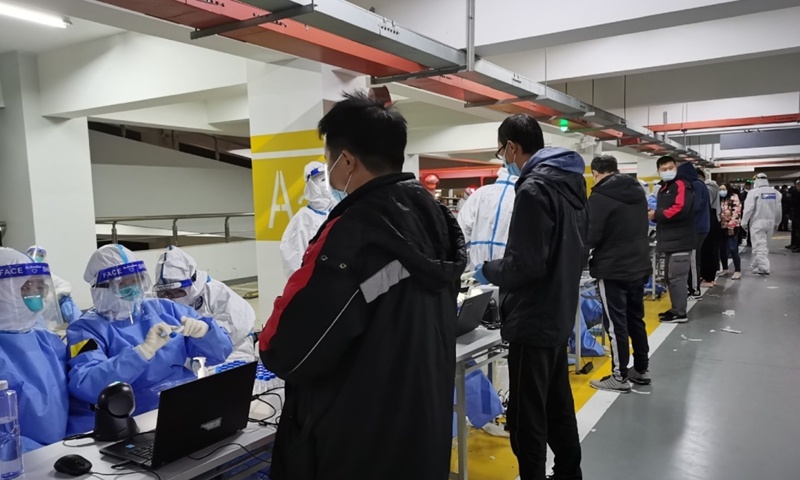 The local COVID-19 patient, discovered on November 9, worked at the Shanghai airport, and his colleague was confirmed the next day in nearby Anhui Province. Both were infected with a virus strain similar to that from North America, Shanghai authorities announced on Monday.

After genetic sequencing, the genes of the two cases were found to be similar to the North American virus strain, indicating that the source of infection was likely imported, Sun Xiaodong, deputy director of Shanghai CDC, said at a press conference on Monday.

When the Global Times reporters arrived at the airport on Monday afternoon, everything seemed normal - passengers were entering the hall for check-in without any delay, and most working staff wore masks, and some added a pair of goggles.

There were very few cancellations on scheduled morning flights, whether domestic, international or regional.

The departure information screen showed all the flights would depart on time.  However, most of the flights were domestic ones. International flights only included those for Hong Kong, Macao, Taiwan, as well as Singapore, and Canada.

A woman surnamed Xue, who was flying to Sanya in South China's Hainan Province, told the Global Times that she was a bit worried at the start after seeing the news previous night because she had planned to travel.

"But after seeing the timely and effective prevention measures taken last night, I feel more relaxed today after watching the news this morning, and learning that Pudong airport was running as normal. I'm very happy and relaxed to start my trip," Xue said.

A woman who asked for anonymity headed for Canada Monday night told the Global Times that she had noticed the resurgence of outbreaks in some cities, but thought every city had done a good job.

The orderly Pudong airport is payback for the hard work of some 240 medical workers and 300 staff who administered nucleic acid tests from more than 17,719 airport-related personnel since Sunday night, analysts said.

Mobilizing people at medium and high risk for nucleic acid tests is a necessary step to track potential infections. But when the patients' activities expand to large areas or have come into contact with large numbers of people, large-scale testing will be used to screen for potential infections, Zhang Boli, an academician at the Chinese Academy of Engineering, told the Global Times in an exclusive interview on Monday.

Tianjin has given massive nucleic acid tests to more than 2.33 million people since Saturday amid 10 local infections, eight of whom were linked to Tianjin's Binhai new area. The epidemic in Tianjin shares a high similarity with the virus strain that was prevalent in North America as well, the Tianjin government said, after analyzing the gene sequence.

The nucleic acid tests in Manzhouli, a city bordering Russia, is also in full swing. Tests on 300,000 residents are expected to be completed in three days. Two confirmed cases were detected in Mazhouli on Sunday.

The city's testing scheme is being carried out in an orderly manner and local citizens cooperate and get their samples collected at designated places, an official from the publicity department of Manzhouli told the Global Times on Monday.

Zhang noted that Chinese cities have accumulated rich experience in dealing with sporadic cases, have developed mature and complete response mechanisms, and can control the spread of the epidemic in a timely manner.

This can be seen more clearly if you compare it with how other countries and regions are dealing with the virus, the Chinese expert said.

The Global Times found despite risks brought by overseas goods, recent confirmed COVID-19 cases had no major impact on the cargo business of the Pudong airport so far.

"Our business is running at a normal pace," a staff member from a logistics department at Chinese Eastern Airlines told the Global Times on Monday. An airport staffer at the baggage check-in area told the Global Times that since the luggage goes along with the passengers, transporting luggage has not been affected by the epidemic in the cargo flight area.

However, to strengthen prevention and control in the winter months, the airport will carry out regular tests for high-risk operators in the cargo area, and arrange for them to receive COVID-19 vaccines voluntarily, the authorities said on Monday.

Facing mounting risks of overseas goods, Zhang also suggested the outer packaging of cargo or mail should be disinfected when they arrived from overseas regions with high coronavirus risks.