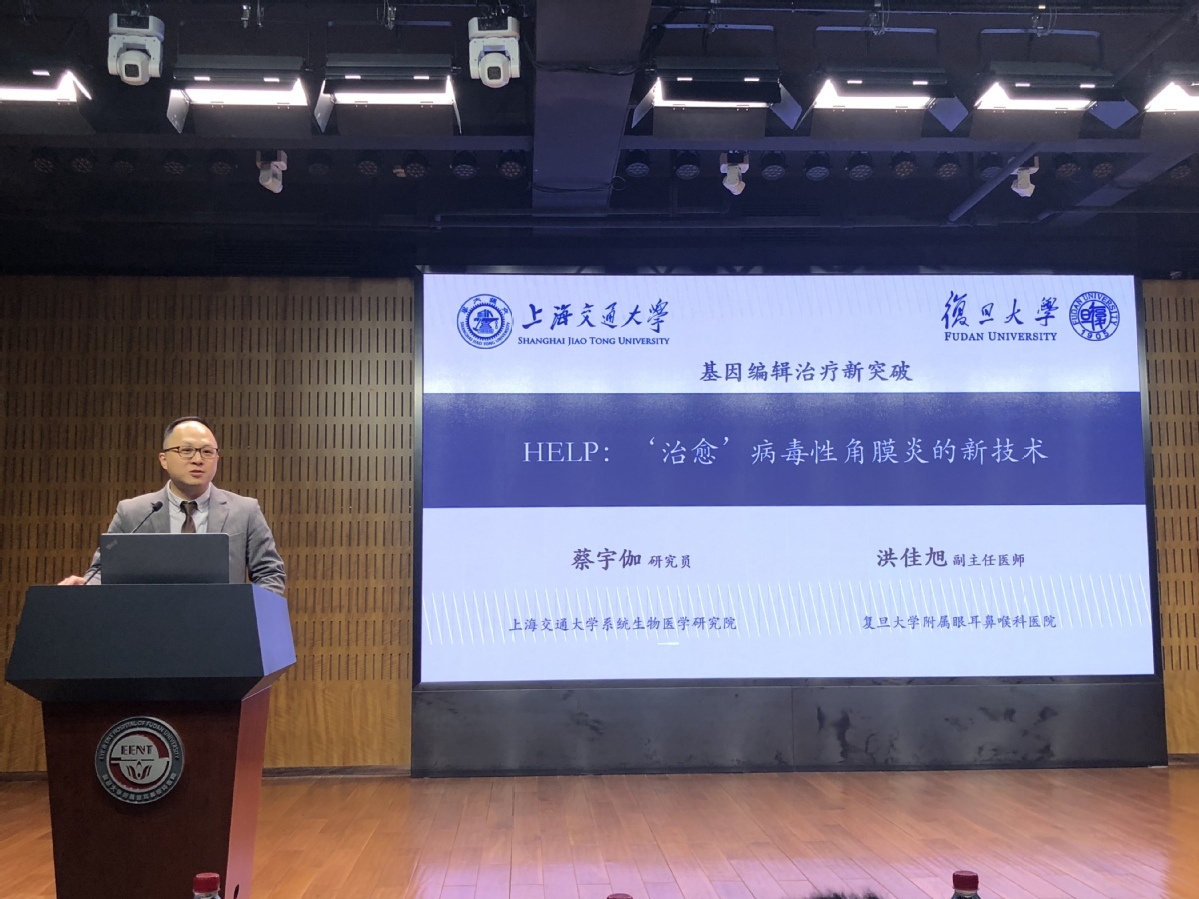 Cai Yujia introduces the gene therapy that can potentially cure viral keratitis in mice at a press briefing on Jan 12, 2021. (Photo provided to chinadaily.com.cn)

Researchers are exploring a gene therapy that can potentially cure viral keratitis in mice, with small-scale clinical trials already taking place in the city, medical experts said at a press briefing on Tuesday.

The researchers involved in this project are from the Shanghai Center for Systems Biomedicine Affiliated with Shanghai Jiao Tong University and the Shanghai Eye, Ear, Nose and Throat Hospital of Fudan University.

The gene therapy has already proven to be successful in treating three infection models in mice - those at prevention phase, disease phase, and reoccurrence - to curb the replication of the herpes simplex virus and thus prevent the occurrence of herpes simplex keratitis (HSK), the number one culprit of infectious blindness in humans and the kind of corneal disease with the highest morbidity worldwide, said the researchers.

There is still no drug or vaccine to treat or prevent such a viral infection, according to doctors.

Researchers said a novel transport technology was created in this gene therapy to precisely guide the tool to the target spot. The therapy works on the genome of the herpes virus to root out the virus infection.

"The therapy only targets the genome of the virus and thus means safety for the whole body. Moreover, the transient gene editing technology can minimize the risk of missing the target and avoid immune response," said Cai Yujia, a leading researcher on the group and a professor from the Shanghai Center for Systems Biomedicine.

A paper about the research was published on the website of Nature Biomedical Engineering and Nature Biotechnology on Jan 5 and Tuesday respectively.

Shi Weiyun, president of the Shandong Provincial Eye Hospital and a leading expert in corneal diseases, said, "Recurrent viral keratitis has long been a difficult point in clinical treatment. This new technology provides an insight into a new solution for the radical treatment of viral keratitis."

The Shanghai Eye, Ear, Nose and Throat Hospital said that the application of the technology, which may be in the form of injection, may be extended to other genetic eye diseases in the future.