SHANGHAI, June 29 (Xinhua) -- China's financial hub Shanghai is gradually resuming dine-in services at restaurants starting from Wednesday as the COVID-19 epidemic has waned in the city.

Dine-in services can be restored in the subdistricts and townships without medium-risk areas and community spread of COVID-19 infections during the previous week, according to a guideline released by the Shanghai Municipal Commission of Commerce. 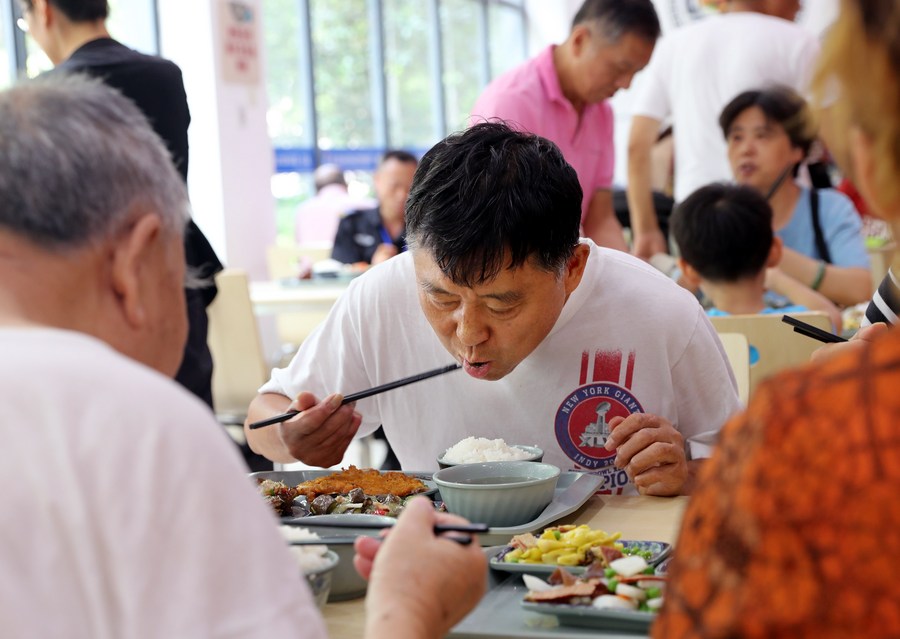 With the easing of dine-in restrictions, restaurants are now allowed to serve customers at no more than 50 or 70 percent of their total seating capacity, depending on their size.

Diners should present negative nucleic acid test reports taken within the past 72 hours, wear masks and undergo temperature screening before entering the restaurants.

Starting Wednesday, indoor dining services have resumed across about 800 Starbucks stores in Shanghai, announced the coffee giant that boasts over 900 branches in the city.

It is a modest contribution of Starbucks to help Shanghai customers return to their pre-outbreak routines and lifestyles, and restore the city's famed buzz and vibrancy, Leo Tsoi, chief executive officer of Starbucks China, was cited as saying in the company's statement.

"It was the first time for me and my colleagues in recent months to eat at a restaurant. I felt the pre-outbreak life has returned to Shanghai as I sipped coffee and nibbled cakes," said a customer surnamed Zhang, who visited a Starbucks coffee shop Wednesday morning.

Starbucks had suspended operations in Shanghai since late March for epidemic prevention and control. With the city gradually reopening commercial outlets starting mid-May, the coffee chain had resumed takeout services in downtown areas.

Its stores will continue to stringently implement epidemic prevention and control measures, including restricting the visitor flow and regular disinfection.

People flocked to time-honored brands of steamed buns, dumplings and noodles near the popular tourist site Yuyuan Garden, as eateries began to resume indoor dining starting Wednesday. To attract customers and boost businesses, the restaurants are launching new food items and working with online platforms to roll out special offers.

"I have been missing the delicacies in these restaurants for a long time. When I learned they will reopen, I couldn't wait to give them a try," said a Shanghai resident.

Normalcy is returning to China as the virus transmission has been brought under control after recent infection flare-ups affected cities including Beijing and Shanghai over the past months.

To facilitate the restoration of work and production, the two cities have strengthened their capacity to implement science-based and targeted measures for epidemic prevention.

Other public places are also gradually resuming operations. With epidemic prevention and control measures in place, Shanghai Disneyland will reopen on Thursday, while in Beijing, the primary and middle school students returned to campus on Monday after over 50 days of remote education.