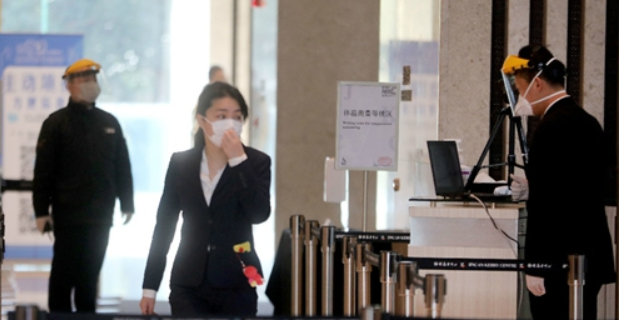 Shanghai authorities have tightened measures to combat the novel coronavirus pneumonia (NCP) as more people return to work on Monday. Railway stations, airports, and highways have spared zero efforts to contain the spread of the epidemic.

Shanghai has made efforts to dissuade people without residence and work in Shanghai from entering its border. The city has dissuaded and rejected 800 vehicles from key NCP-hit areas, authorities said at a news conference on Monday morning.

Temperature screenings for commuters have been set up at nine railway stations in Shanghai. Passengers showing abnormal temperature will be sent into the quarantine zone, and if required transferred to the hospital directly, according to the Shanghai authorities Monday.

Since January 22, a total of 1,148 people entering Shanghai by road have been quarantined, among who 408 showed abnormal temperatures, the authorities said.

So far, about 5,500 personnel, including policemen, law enforcement officers, and volunteers have been deployed at the road checkpoints to frisk every vehicle entering Shanghai, including information registration and temperature checks.

Besides, 13,000 residential communities in the city have joined in the effort. Most of the communities are under "closed-off management," and communities with large expat residents also posted notices both in Chinese and English.

Staffers at Jiangjiaqiao residential community in Shanghai's Hongkou district visited all of its over 1,200 households to inquire about their situations.

For the residents who have just returned after spending the Chinese New Year (CNY) holiday out of Shanghai, the community asked them to report their health conditions and travel history, the community director Ding Sufang told the Global Times.

Shanghai government made it compulsory for citizens who have returned from Central China's Hubei Province, the epicenter of the epidemic, and other areas with the most number of infections to adhere to self-imposed quarantine for 14 days.

Xinmei Gonghecheng residential community in Shanghai's Jing'an district has seen more than 100 families return after the CNY holiday. Among them, 14 families returning from areas with the most cases of infection are quarantining themselves at home, said the community director Zhao Jian.

As an increasing number of people have to go out for work starting from Monday, the community is issuing entry passes for its residents. "We will issue the entry pass to every resident," Zhao told the Global Times Monday, adding that people without the pass will not be allowed to enter the community.

The municipal government has encouraged businesses to explore flexible work conditions or allow employees to work from home. For those who have to go to the office buildings need to follow the strict rules.

As of Monday, the city has reported a total of 299 confirmed cases. Although Shanghai has witnessed one-digit new NCP cases for consecutive days, medical expert Wu Fan said during the municipal government's daily press conference that it's still too early for the public to claim that the inflection point of NCP has appeared in the city.