Shanghai's domestic flight and passenger volume back to normal levels 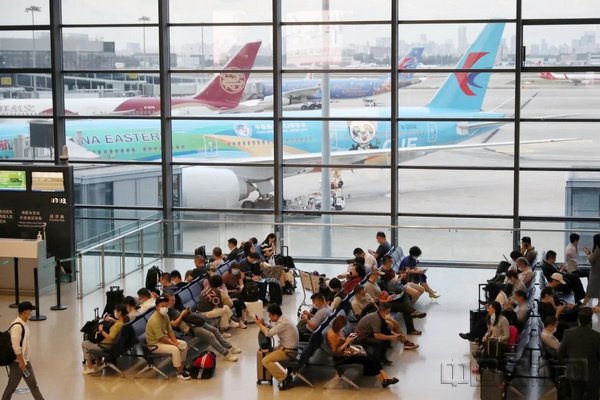 Passengers wait in the departure hall of the Shanghai Hongqiao International Airport.(Photo: agencies)

The domestic flight and passenger volume of Shanghai's two airports have been restored to the same level as last year due to the fast-recovering Chinese economy and consumer confidence, according to the Shanghai Airport Authority.

Shanghai Hongqiao International Airport is expecting about 750 landings or take-offs per day and about 120,000 passenger trips on daily basis during the week-long National Day holiday which takes place from Oct 1 to Oct 8 this year.

"Domestic air travel has gradually recovered, and currently has almost reached the same level as last year. We are expecting a further growth in passenger numbers and flights during the holiday," said Tang Yichen, the manager in charge of the Hongqiao airport's operation headquarters.

Tang added that up to 130,000 passenger trips are made via Hongqiao Airport on peak days.

Pudong International Airport is expecting 900 landings or take-offs, as well as 130,000 passenger trips a day during the holiday.

Nationwide, a total of 119,600 aircraft landings or take-offs are expected to take place during the eight-day holiday, and the top destinations are Beijing, Shanghai, Guangzhou and Shenzhen of Guangdong province, Chengdu of Sichuan province, Kunming of Yunnan province, Chongqing, Hangzhou of Zhejiang province, Xi'an of Shaanxi province and Sanya of Hainan province, according to data collected by Chinese aviation data and solution service provider AirSavvi.

In order to protect travelers' health and safety, the Shanghai airport authority has upgraded their measures in preventing and containing the contagion through temperature checks, mask wearing, constant disinfection of facilities, as well as provision of disinfection and first-aid products at departure halls, said Tang.