CHINA Shanghai’s own variety of melon, Nanhui 8424, in high demand as temperatures rise

Shanghai’s own variety of melon, Nanhui 8424, in high demand as temperatures rise

Summer, the best season to eat watermelon, has arrived. The most favored variety of local watermelon is Nanhui 8424, which is from Pudong New Area. At 4 am in Pudong's Huinan Town, a dog barks as three men walk down the quiet streets. It has been a regular practice for farmer Mou Jianbin to get to his fields before dawn. The temperature in his greenhouse is already 30 C. It will climb above 40 C after the sun rises. Therefore, Mou must collect his watermelons as soon as possible to protect them from the sun and heat. 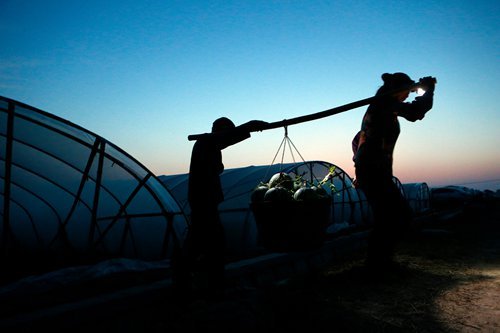 Farmers get to the field before dawn. (Photos: Yang Hui/Global Times)

Turning on their hat-mounted flashlights, Mou and two fellow townsmen enter the greenhouse. They squat down, placing their ears closely next to the watermelons and patting them gently to determine which ones are ripe. Ripe melons go into their bamboo baskets.

Mou has been planting watermelons for 20 years, starting with just a few greenhouses and working his way up to managing 13 hectares of fields. There is an increasing diversity of Chinese watermelons, which makes them even more delicious, but also more expensive.

The emerald green color of the watermelons becomes more apparent as the early morning sun rises over the fields. By now, hundreds of baskets of watermelons have already been collected. At 6 am, 11 trucks are driven into the fields in succession. The farmers hand-load the watermelons one by one onto the trucks.

According to Mou, each truck-full of watermelons weighs 2,750 kilograms and a total of 20,000 kilograms of watermelons on average can be collected from the fields each day. Apart from Nanhui 8424, other types such as "double-color ice-cream" watermelons are also available.

Mou exclaims that the rising demand for watermelons reflects the increasing living standards of Shanghai citizens. He feels more enthusiastic about his work as the number of watermelon consumers increases. 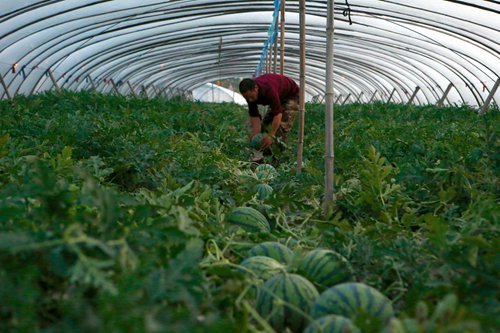 A man works in a greenhouse. 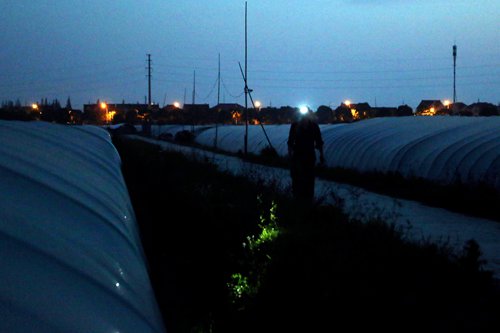 Watermelon field at 4 am. 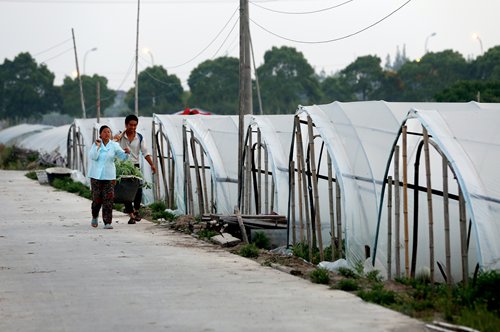 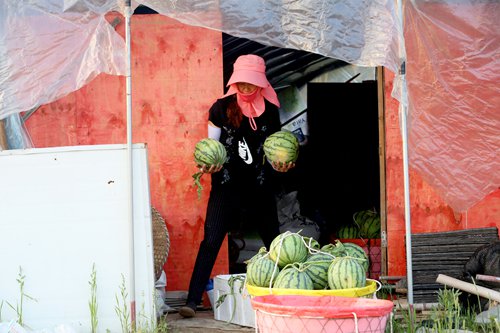