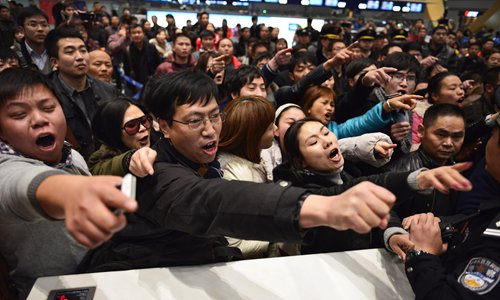 Passengers whose flight was delayed, due to heavy fog, demand apology from airline at Changshui Airport in Kunming, Yunnan Province. Photo: VCG

A video showing a large crowd of Chinese passengers at an Iranian airport shouting "China! China!" recently went viral.Hundreds of Chinese passengers were stranded at the airport due to bad weather on January 29, when discontent grew among them for what they say were unsatisfactory accommodations by the airport. Later, upon learning that the airport would offer them free hotels with the assistance of the local Chinese embassy, they erupted with the cheerful chanting.Though some Chinese netizens feel proud, others say they are "humiliated" by these types of overly patriotic tourists, who are a "disgrace of the country."It was the third time in just one month that Chinese passenger groups overseas have "disturbed its motherland" after encountering disputes at foreign airports.In early January, a crowd of Chinese at a Tokyo airport were spotted singing the Chinese national anthem. On January 27, after 150 Chinese passengers stuck for eight hours at a Sri Lanka airport began chanting, the local Chinese embassy issued a statement calling for "calmness."Some netizens said bluntly that these people are "bringing shame" to China by leading people in other countries to believe that Chinese tourists are always ready to show off their patriotism. Some media also regard these people as "kidnapping nationalism and patriotism" for their own personal interests."It is incredible that whenever a flight is delayed, whether or not due to extreme weather, the patriotic sentiment of Chinese passengers at foreign airports rises," one netizen satirized.Experts say that this behavior is "nothing surprising" for Chinese who grew up in the 1960s or earlier, when almost everything in their lives was related to politics and government."Growing up at a time of pan-politicalization, these people have had their world view and behavior thoroughly socialized," said Qi Lingling, an associate professor of politics in Nanjing University. "What we see now is just a continuation of that socialization." 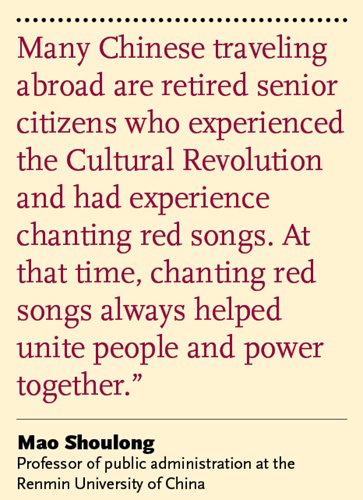 Bringing people togetherQiji, a young man born in the 1990s, told the Global Times that he was at the Tokyo airport on January 24 when the signing erupted."It was really disgraceful," said Qiji, recalling that, on that day, he witnessed a Chinese woman clashing with airport staff before yelling "Japanese despise Chinese!" and mobilizing Chinese passengers around her to chant the national anthem. "Then they started to sing again when the police arrived and tried to take away the troublemaker lady," Qiji revealed.As reported, 175 Chinese passengers were stranded at the Tokyo airport after their flight to Shanghai was canceled due to heavy snow. But the tourists failed to understand the situation, which eventually led to the scene."If one feels being wrongly treated [overseas], he or she should have safeguarded their rights in a sensible way," Qiji said. "Shouting in the airport, like that woman, will affect other passengers and only bring shame on herself."Such irrational behavior by passengers at Chinese airports is not uncommon, and these scenes are reminiscent of another age, when one waved their arms and shouted slogans and everyone else would follow.However, against a modern, international background, it can seem out of place."Many Chinese traveling abroad are retired senior citizens who experienced the Cultural Revolution and had experience chanting red songs. At that time, chanting red songs always helped unite people and power together," said Mao Shoulong, a professor of public administration at the Renmin University of China.Shouting "China!" and chanting the national anthem are among the many means used by senior tourists to demonstrate their patriotism when they feel mistreated overseas. Such incidents, however, are mostly commercial disputes caused by a lack of proper communication between passengers and staff."Chinese passengers need to be more sensible when safeguarding their rights. It is not proper to make everything rise to the level of politics," said Mao.But Qi regards it as subconscious behavior because it is "how they operate in China always, relying on the government for everything. It is so natural for them that they may not even know why people are criticizing them," said Qi.Traces of a timeAs Qi observes, such incidents are quite natural considering the historical background of these people's growth. "It is how they have been doing things in daily life. They just take the habit abroad."After the founding of PRC and before the reform and opening up, particularly during the Cultural Revolution, China went through several decades when politics was a priority in everyone's life and political elements infiltrated every corner of society.At that time, everything a person said or did, even unrelated to politics, could be interpreted in terms of politics. A person's birth, schooling, job hunt, marriage and even to death were all taken care of by the government and based on politics."After the reform and opening up, the space for individualism in society has enlarged, so people now enjoy a diversified life. But the ideas of that time are deeply rooted in the minds of that generation," said Qi. "In addition, China remains a socialist country where the government plays an important role."In September of 2015, Chinese tourists at an airport in Bangkok chanted the national anthem hand-in-hand after their fight was delayed and they were not content with the airport's arrangements. Several passengers who accepted the airport's arrangement and did not join in the chanting reportedly were scolded as "traitors (to China)."Mao calls such safeguarding of "emotional" rights, which sometimes blends commercial disputes with nationalism, a "by-product of patriotic education." "It is okay to demonstrate patriotism at will domestically, but the same thing means something different when done in a foreign land."A university teacher, Qi said many international students unfamiliar with Chinese history are confused about why China, which is a great power right now, continues to educate its people about its "century-old humiliation.""Patriotic education is very successful, which makes Chinese think of their motherland when an emergency happens. Meanwhile, Chinese people are sensitive about its humiliating history," said Qi, adding that it also makes many Chinese have a "victim mindset" when traveling in other countries."It is mainly because Chinese are not confident enough," said Qi, calling for Chinese passengers to be more sensible.Becoming more rationalDuring the Tehran airport incident, to reach the stranded Chinese passengers, the local Chinese embassy negotiated with local police and signed a security guarantee before getting special permission to drive through the blocked highway due to heavy snow.As Xu Wei, a minister-counselor from the embassy, revealed to the Global Times, their car was the only vehicle on the highway, which pushed through like a snowplow for four hours."A Chinese ambassador once told me that too many commercial disputes involving Chinese travelers have affected the focus of their embassy's work," Mao said.While helping their countrymen, three Chinese embassies issued public notices calling for Chinese passengers to keep calm and safeguard their interest according to the law.The foreign ministry of China also issued a notice reminding its citizens traveling abroad to read their contracts with the airlines carefully when they buy cheap tickets, which may not offer free meals or accommodations, and to avoid using extreme means to demand services not written in the contract.These people were also harshly criticized by some Chinese media and netizens, described as "giant babies" in headlines."It is interesting that mainstream media have begun to criticize such behavior. It shows that the government is becoming more rational," said Qi, who called for more tolerance for these people, taking their background into consideration."It has only been a short time since ordinary Chinese people started to travel abroad. The majority are not able to understand many things from the angle of an international citizen yet. A lot of people are still very Chinese," said Qi."Thirty years later, when the younger generations born in 1980s and 1990s reach their age, the situation will be much better."