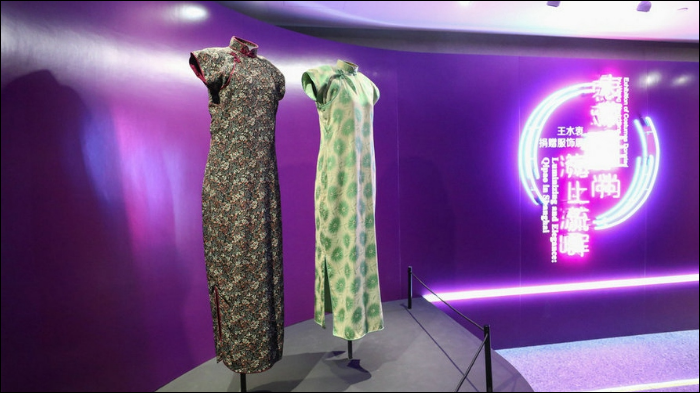 About 338 Shanghai-style cheongsams and accessories donated by Taiwan collector Wong Shui-zhong have been showcased at the Shanghai History Museum since Thursday.

The cheongsam, or qipao, is considered one of the most representative costumes of Chinese women in contemporary history.

The wardrobes of Chinese women of all classes in the 1920s-1950s had the same clothing item: cheongsams, which only differed in materials.

Just as the renowned Chinese writer Eileen Chang once described her rosy-hued cheongsam as having "the fragrance of a color that can be smelled," the dress was often connected with many poetic scenes in stories and real life.

One of the best works showcasing the beauty of the cheongsam is the 2000 film by Hong Kong director Wong Kar-wai titled "In the Mood for Love," in which actress Maggie Cheung wore 23 different cheongsams with a variety of colors and patterns.

Since the cheongsam first emerged in the 1920s, the style of this one-piece dress has undergone dozens of changes. The sleeves, length and collar of the dress have seen the most adaptations.

Meanwhile, two overall styles of cheongsam, Shanghai and Beijing, have emerged, with Shanghai having more patterns and more accentuation of women's shoulders and figures.

Wong has been collecting cheongsams for over 30 years, and by donating them to the Shanghai History Museum, he said he wanted the dresses to return to their real home.