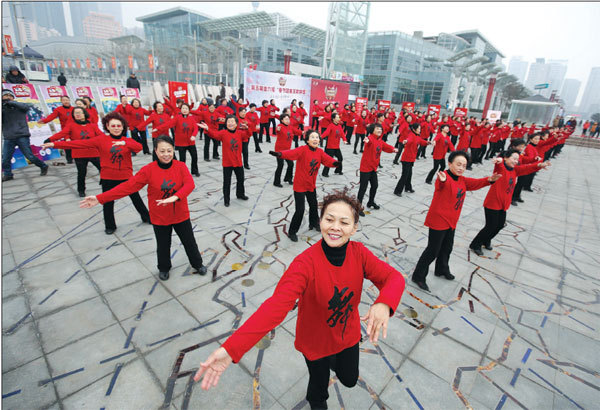 Square dancing is one of the most popular activities among China's elderly population, and it has often caused controversy because of its loud music and use of public spaces.(Photo: agencies)

Shanghai recently became the latest city in the country to unveil local regulations on square dancing, a popular form of mass fitness among the middle-aged and the elderly that has sparked controversy because of complaints from nonparticipants about disturbances.

The group of individuals participating in square dancing should adhere to public rules and social customs and never disturb others around them, according to the Shanghai Municipal Regulation on the Protection and Promotion of Public Cultural Services, which was approved by the city's legislature on Tuesday.

The local subdistrict authority and managers of public venues will assume a larger role in the organization and coordination of such public dances to ensure they are carried out smoothly, according to the regulation that will take effect at the beginning of next year.

Issues surrounding square dancing－which on the one hand is a healthy activity for participants and on the other hand a disturbance for bystanders as loudspeakers are usually used－have been discussed for years. The new regulation aims to find a balance, according to the local legislature.

Some other cities and provincial-level regions have published similar regulations aimed at the problem.

In Beijing, a regulation targeting public sports activities that took effect in 2017 stipulated that all participants in such activities at public venues should not disturb others.

The Guangxi Zhuang autonomous region's measure, effective in 2016, clarified that musical instruments or loudspeakers are forbidden for all sports activities in public areas between 10 pm and 6 am.

A similar regulation took effect in 2015 in Xi'an, Shaanxi province. Individuals who violate the regulation and refuse to correct their behavior will be fined 200 yuan ($30).

Few details have been given about Shanghai's regulation.

Xia Yang, from Minhang district's Xinsong subdistrict management office in the city, said that she hoped the regulation would specify the maximum decibels that music can be played at and the minimum distance that dancing participants must keep from residential buildings so that they can better put the regulation into practice.

Li Zishu, who lives on Loushanguan Road in the city's Changning district, said that there is usually a crowd of more than 100 people that join square dances near her home, and her 9-year-old son often complains about the noise from the loudspeakers.

"The time for the elderly to enjoy square dancing is from 7 pm to 9 pm after dinner, which coincides exactly with the prime time for children to do school assignments. I hope the regulation will provide a reasonable time frame for public dancing," said Li, who said she even installed an airtight window above the boy's desk.

Zhang Lixin, a 65-year-old Shanghai resident who has participated in square dancing for six years, said this form of leisure and sports is popular among many of her friends. She said they understand the importance of respecting neighbors but expect the government to allow them to have access after dinner to more venues, such as schools and community activity centers.