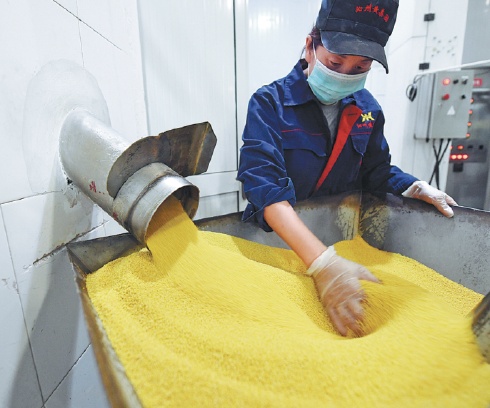 A worker at Qinzhou Yellow Millet Group processes a load of the cereal before it is delivered to Canada. (Photo: China Daily)

Peng Lisha, a sales manager of Qinzhou Yellow Millet Group based in Qinzhou city, Shanxi province, is estimating the arrival date of a shipment of millet bound for Canada.

"More than half a month passed since it departed Tianjin Port and it's about to arrive at Vancouver Port in a few days," Peng said.

Peng is concerned with the shipment because this is the biggest deal she has made for her company this year, in the context that foreign trade has been affected by the COVID-19 pandemic.

The executive said she received an enquiry from Canada's Afod in April. "After Afod representatives visited our company three times in May, we signed an agreement on June 4, which authorized Afod as the exclusive dealer of our yellow millet in Canada," Peng said.

She said a total of 200 metric tons of millet will be shipped to Canada in 2020."This is the largest export volume of yellow millet from Qinzhou in its history," Peng said.

Qinzhou is a major producer of yellow millet in Shanxi and is known throughout the country for the high quality of its product.

According to Wen Xiuwei, executive deputy president of Qinzhou Yellow Millet Group, the company began to export millet to Canada five years ago but the sales volume was small.

In addition, there are sales of millet in Poland and Australia but the total amount is about 3 tons a year.

"The founder of Afod is a Canadian-Chinese, whose hometown is in Shanxi," Wen said. He added that the boss is familiar with all varieties of millet in Shanxi and knows the products from Qinzhou are among the best.

"We learned from Afod that millet products sold very well in some supermarkets in Canada, especially among Chinese communities. And they also have plans to sell them in the United States," Wen said.

The executive said the millet products are processed according to the strict requirements of the client.

"Millet is stored in warehouses at temperatures between 1-2 C and undergoes multiple procedures of sorting and dehulling before delivery," Wen said.

"When the product arrived at Tianjin Port, it passed strict checks by Afod representatives. We received payment three days after the checks," said Peng, the sales manager.

"We will get further feedback when the products arrive in Canada and are sold in local markets. Further improvements will be made according to the feedback," she said.

Qinzhou Yellow is a renowned millet brand name with a local geographic indication trademark. It was a favorite food of the royal families during the Ming (1368-1644) and Qing (1644-1911) dynasties, according to local historical records.

However, the yellow millet unique to Qingzhou had been seen by local farmers as a variety with a low output and crops were limited to certain higher-altitude areas.

In the 1970s, the Shanxi Academy of Agricultural Sciences and Shanxi University of Agriculture jointly established a research program on Qinzhou's yellow millet. They studied whether the grain could be grown in other regions or whether the per-unit output could be raised.

The eight-year program led to a substantial improvement in the output of yellow millet and helped it adapt to a wider range of geographic conditions, while maintaining its quality.

Qingzhou Yellow Millet Group was established in the 1990s as a local flagship company in the processing and sales of the products.

Millet was among the earliest grains in China. It has been planted on the Loess Plateau that today includes Shanxi and Shaanxi provinces for around 7,000 years.

The area of millet in Shanxi is currently between 200,000 and 240,000 hectares, accounting for about 10 percent of the country's total. Its output is about one-eighth of the national total, according to Shanxi Food and Strategic Reserves Administration.

To improve market recognition, the Shanxi provincial government released a plan for the brand building of local millet in August 2017.

The plan required the establishment of industrial alliances and a regional brand for the products.

"Since 2017, a millet industrial alliance, a millet industry operational center and a collective brand of 'Shanxi Millet' have been established, helping to promote the products throughout the entire country and the rest of the world," said Wang Yunlong, head of the Shanxi Food and Strategic Reserves Administration.

"To meet customer demands for healthier food, Shanxi has developed more than 20,000 hectares of farmland for organic millet and its output is expected to surpass 50,000 tons this year," Wang added.

The official noted that growing millet is an important means to help rural residents lift themselves out of poverty.

Qinzhou Yellow Millet Group, for instance, has helped more than 20,000 rural households by encouraging them to grow the crop, purchasing their products, promoting advanced farming techniques and providing financial assistance, according to Shi Yaowu, board chairman of the company.