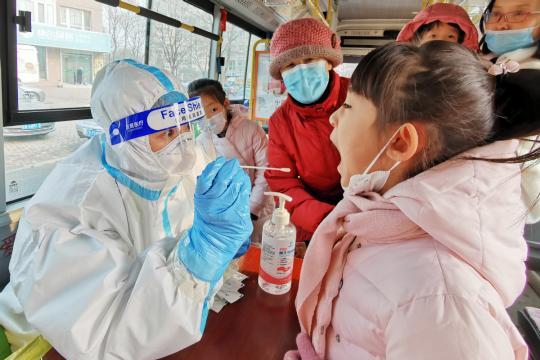 A medical worker prepares to take swab samples from residents for coronavirus tests in Ganjingzi district of Dalian on Wednesday.(Photo: China Daily)

Shenyang, the capital of Liaoning province, has introduced stricter anti-COVID-19 measures after one confirmed case and one imported asymptomatic case were reported on Wednesday.

The confirmed case involves a 67-year-old Chinese woman surnamed Yin, who returned from South Korea on Nov 29. Surprisingly, she was diagnosed as a confirmed case on Wednesday, 10 days after she was released from a 14-day quarantine.

When and where she contracted the virus remain under investigation, said the local health authority.

The results of three nucleic acid tests and one serum antibody test on her arrival and during her quarantine were all negative, and she left the quarantine hotel on Dec 13.

As of 7 pm on Wednesday, Yin's 71 close contacts and 69 secondary close contacts had been quarantined for medical observation and nucleic acid testing, and 45 test results have been released so far, which were all negative, according to the city's health commission.

In response, Shenyang announced that, with its strengthened restrictions, the city was in a "state of war" in its battle against the virus, according to the city's epidemic prevention and control office.

Specifically, emergency measures such as closed management, disinfection and testing have been implemented at two residential areas, five medical institutions and two schools related to the confirmed and asymptomatic cases and their close contacts.

Disinfection was carried out in 51 places such as the patients' homes, taxis, clinics and hospitals, in a bid to cut transmission of the virus.

Prior to the Shenyang outbreak, Dalian, another city in Liaoning, reported a cluster of infections in recent days.

The province currently has seven confirmed COVID-19 patients in hospitals and another 22 asymptomatic carriers under quarantine and receiving treatment, according to the commission.

Dalian's latest round of infections began on Dec 15, when four port workers handling cold-chain products were found to be asymptomatic carriers.

The city launched testing of all of its residents on Tuesday, and this is scheduled to end on Thursday, the city's health authority said.

"This is the second time I have had a nucleic acid test. How much better it would be if only we could have the COVID-19 vaccine right now," said Liang Ying, 50, as she was waiting to be tested by medical workers in Dalian's Xigang district on Wednesday.

Since Tuesday, residents of Dalian were asked not to leave the city unless it is necessary, and those who do need to leave must provide a negative nucleic acid test result no older than seven days.