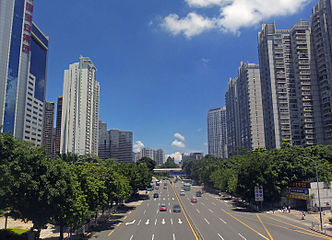 China's first special economic zone, Shenzhen, may have surpassed Hong Kong and Guangzhou in terms of GDP thanks to its creativity and favorable policies.The city's GDP in 2017 stood at 2.244 trillion yuan ($357.2 billion), an 8.8 percent increase from 2016, the Statistic Bureau of Shenzhen reported on Thursday. Estimates put Hong Kong's GDP for 2017 at $332.8 billionThe World Bank calculated Hong Kong's 2016 GDP at $320.9 billion, and the Hong Kong government last November predicted the Special Administrative Region's GDP growth in 2017 would not exceed 3.7 percent. If that holds true, Shenzhen's GDP last year was some $25 billion greater than Hong Kong's.Shenzhen's GDP also surpassed that of the city of Guangzhou, in South China's Guangdong Province, which reached 2.15 trillion yuan in 2017, the Southern Metropolis Daily reported.An unremarkable fishing village prior to China's reform and opening-up which began in 1978, Shenzhen has become a metropolis with the third biggest GDP on the Chinese mainland. Only Beijing and Shanghai's GDP are greater.When Laurent Le Pen, a French businessman came to Shenzhen a decade ago, he had to explain to his friends that he was going to a city near Hong Kong, as few people were familiar with the city in France. Since then Shenzhen has garnered global renown for its sonic growth and as home of Foxconn, which provides production lines for Apple's iPhone and other electronics. "Many people think Shenzhen is the new silicon valley of hardware, I think it's the new Silicon Valley," Le Pen told the Global Times, noting that more Chinese tech firms in the city are creating their own innovative products."China is eager to adopt new technologies," said Le Pen, noting that in recent years fewer innovative products have come out of Silicon Valley in the US, but more are originating from Shenzhen. Perks for professionalsXiao Jing, chief scientist of Shenzhen-based Ping An Technology, returned to China from the US in 2015. After a decade working in Silicon Valley in the US and for Microsoft, he decided to return to China to work for Ping An Technology in Shenzhen. "Shenzhen is a very young city, which has many favorable policies to attract talented professionals," Xiao told the Global Times on Monday. The local government provides financial support and help obtaining a hukou or city residency permit which provides access to numerous municipal services. "Alongside the national-level recruitment program of global talent, Shenzhen has a complementary program dubbed the 'Peacock Plan' to attract more professionals to the city," he said, adding that Shenzhen's average age is 31 years old. Shenzhen launched the plan in 2011, with the goal of attracting thousands of highly-skilled professionals. "It's the right place for innovation, it's very much like Silicon Valley, but probably better," Xiao said.