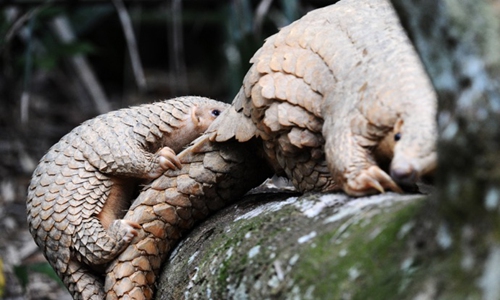 A baby Sunda pangolin and its mother. (File photo: Xinhua)

Eating pet dogs, snakes, birds, and turtles may be banned soon in Shenzhen, south China's Guangdong Province, as the city issued a draft regulation on consumption could n of wild animals, and a violation could lead to fines and affect people's credit score.

The city issued the draft regulation as well as a blacklist and an edible whitelist of what kind of animals can be consumed on Tuesday. Eating wild animals is quite popular in Guangdong.

Dubbed as the "strictest regulation," it aims to abolish the bad habit of wild animal consumption and control major public health risks from the source, the regulation stated.

The regulation extended the blacklisted animals from wild animals protected by laws and animals naturally in the wild to artificially bred, reared wildlife and pets.

Following Shenzhen, Guangzhou is also to ban the consumption of all terrestrial wildlife except livestock and poultry, according to the Guangzhou wildlife conservation office.

"Some people raised wild animals, such as turtles, snakes, birds, and insects that have a great risk of spreading diseases and they cannot guarantee the safety of consumption," an official with the Shenzhen People's Congress said.

The Shenzhen regulation also whitelisted nine edible animals to give an easy and quick answer to what animals can be eaten. Pigs, cows, sheep, donkeys, rabbits, chickens, ducks, geese and pigeons are on the list.

Mixed comments poured in after the draft was released.

"I am very supportive of this regulation as many wild animals can carry unknown viruses and can harm our bodies," Wang Haiyan, 50, from Guangdong told the Global Times.

She used to buy artificially raised turtles for food but said she won't do so again and would turn to other sources.

You Yuan, a media professional working in Guangdong, said the measures in this draft are "a little aggressive and leave little time for the whole industry to react, especially for those who legally rear the wild animals."

"Even for the animals in the whitelist, wild farming is common. For example, the wild-farmed chickens and pigs are very popular among Cantonese in recent years. From the perspective of epidemic prevention, the safety issues raised in the draft are not well-grounded," You told the Global Times.

A staff member of the Standing Committee of the Shenzhen People's Congress told the Global Times that it is accepting public opinions from residents and will take the next move by March 5, based on the feedback.

"A lot of local people in Guangdong dine on wild animals like snakes. As long as market transactions are banned, they will not eat them again," she added.