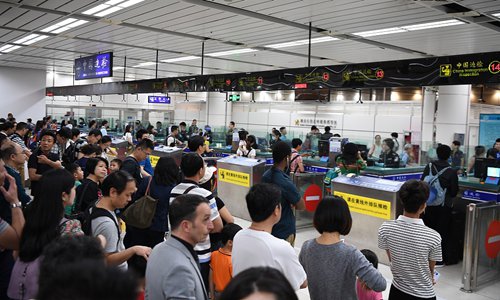 Shenzhen residents who report foreign expats for illegally entering, staying or working in the booming Guangdong Province port can claim cash rewards, according to the local police. Rewards are also being offered to the South China city's residents for naming any organizations that illegally recruit foreigners. In a bid to enhance its identification and regulation of foreigners, the city police's exit-entry administration bureau released via a notice on its WeChat account on Thursday.If a tip is confirmed as true, the whistleblower stands to gain 500 yuan ($73) per suspect under administrative detention and 300 yuan per suspect being fined, according to the Thursday notice. The government notice pointed out that illegal foreigners disturb the job market and employment environment and likely affect social stability. Foreigners who illegally enter, stay or work in China are often referred to as the "three illegals," or sanfei, in official Chinese media. Zhi Zhenfeng, a legal expert at the Chinese Academy of Social Sciences in Beijing, hailed the move as an effective method to "motivate common people" to report on the "three illegals" and so regulate them in accordance with the law.  "It's crucial to protect the whistleblowers from retaliation," Zhi told the Global Times on Sunday. In 2018, authorities punished 121,000 foreigners for illegally entering, staying or working in China, up 12 percent year-on-year, according to the Beijing-based daily newspaper Legal Daily. Liu Guofu, an immigration law expert at the Beijing Institute of Technology, noted that regulation of illegal immigration was a problem shared throughout global society.  "Such groups not only violated the country's immigration laws, but also pose challenge to the labor, health and other departments who don't know their whereabouts and situations," Liu told the Global Times on Sunday. Liu said that China imposed harsher penalties on illegal agencies that recruited foreigners than it did on the foreigners themselves. "The foreigners usually receive administrative punishments only, but illegal immigration is regarded as a crime in many other countries," he said. Foreign expats who illegally enter, stay or work in China face 5-15 days administrative detention and a fine up to 10,000 yuan, according to China's Exit and Entry Administration Law, which was implemented in 2013.  Illegal foreign teachers are more prevalent in first-tier cities, Liu noted, while illegal laborers are more seen in the delta areas around the Yangtze and Zhujiang rivers. In August of 2018, a suspect surnamed Liu was sentenced eight years in prison and fined 200,000 yuan by No. 1 Intermediate People's Court of Shanghai for helping foreigners enter China with travel visas and work illegally as housekeepers in cities including Beijing, Shanghai and Chengdu in Southwest China's Sichuan Province, the Xinhua News Agency reported. Illegal foreigners usually congregate at border and port areas, but some were heading inland with tightening checkups and residential crackdowns, Liu said.  More than 950,000 foreign people are working in China and the country issued 336,000 work permits for foreigners last year, People's Daily reported on April 15.