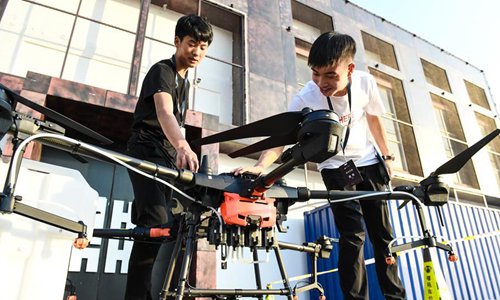 With an inclusive culture, an opening-up environment and a dynamic innovation vibe, Shenzhen in South China's Guangdong Province has seen rocketing population growth in the past decade, which shows an almost diametrically opposite attitude from Hong Kong toward outside talent, experts said on Thursday.
Shenzhen's regular population increased by 48.5 percent during the past decade, according to media reports. Experts noted that it's not only Shenzhen - the whole Pearl River Delta region in southern China has become a population cluster in recent years, including Guangzhou and Zhuhai.
The tertiary industry has become the most important sector for Shenzhen to absorb population, domestic economic news site 21jingji.com reported on Thursday.
Employment in the tertiary industry rose rapidly to 6 million in 2018 from 3 million a decade earlier, the report said, noting that the figure in 2018 had surpassed Guangzhou, capital of Guangdong.
Manufacturing industries in Shenzhen drew many people in earlier years, especially migrant workers. With the promotion of industrial upgrading of China, the growth in population is now different, Liu Guohong, director of the Department of Finance and Modern Industries at the China Development Institute in Shenzhen, told the Global Times.
Employees in the research and development (R&D) and high-technology sectors have been flowing into Shenzhen, thanks to its rapid development as an innovation hub and start-up incubator, Liu said.
Domestic technology giants Huawei and Tencent are both based in Shenzhen. Other advanced technology companies including Chinese leading commercial drone producer DJI have also attracted great numbers of experts.
"An opening-up, easier environment is also an advantage for Shenzhen to attract young people," Liu said.
Bai Siming, a Shenzhen-based resident who is working in the financial industry, told the Global Times that the Shenzhen government gave her an award of 13,000 yuan ($1,850) when she choose to stay in Shenzhen after graduation in 2015.
However, Hong Kong, the world-class metropolis near Shenzhen, has shown a totally different picture with its months of unrest. Students from the Chinese mainland have been fleeing back to the mainland to avoid violent attacks from radical protestors and even foreign visitors' safety can't be guaranteed in Hong Kong.
The two cities of China, whose residents can see each other across a river, are now showing totally different views, day and night. Young people on the north side of the Shenzhen River are working passionately to create cutting-edge technology, while Hong Kong youngsters on the other side are smashing and burning up the city, Liu noted.
Hong Kong's attractiveness to high-level experts from around the world will definitely drop in the future, Liu said, not only because people may be deterred by the unrest, but also because once a company or institute leaves, it is really hard for it to move back.