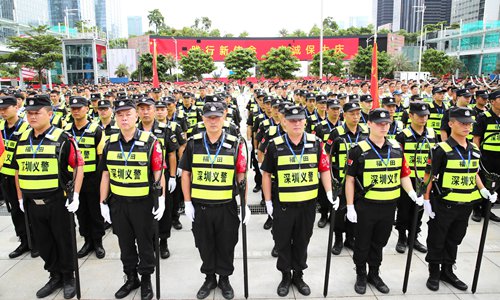 A total of 240,000 Shenzhen residents have been mobilized to work as volunteer police to prevent terrorism and violent crimes as neighboring Hong Kong has been vandalized by violent protests for more than two months.
A volunteer police team of 5,000 residents including people working in the catering and retail industry was launched in Shenzhen's Futian district on Tuesday, local police confirmed with the Global Times on Wednesday.
The volunteer officers will wear police reflective vests and carry flashing lights, whistles and batons when patrolling the city's main streets day and night under the guidance and serve as an assist force to the police.
The team has already started their work in a Futian community under two pilot programs where they patrol the streets and intervene immediately if they spot a fight or other crimes, according to a statement Futian public security bureau sent to the Global Times on Wednesday.

A drill featuring measures dealing with urgent incidents and terrorist activities, including fighting and stabbings, robberies and rioters attacking residents, was held in Futian on Tuesday, it said.

In the drill, volunteers used batons, shields and police dogs to capture suspects. Their responsibilities include dealing with and preventing terrorism, violence and extreme incidents, fighting against cults and controlling illicit drugs, according to the sznews.com news site.
Futian police will enhance the training of volunteers to help sustain the public security and social order for the upcoming 70th anniversary of the establishment of the People's Republic of China, said a deputy head of the Futian public security bureau.