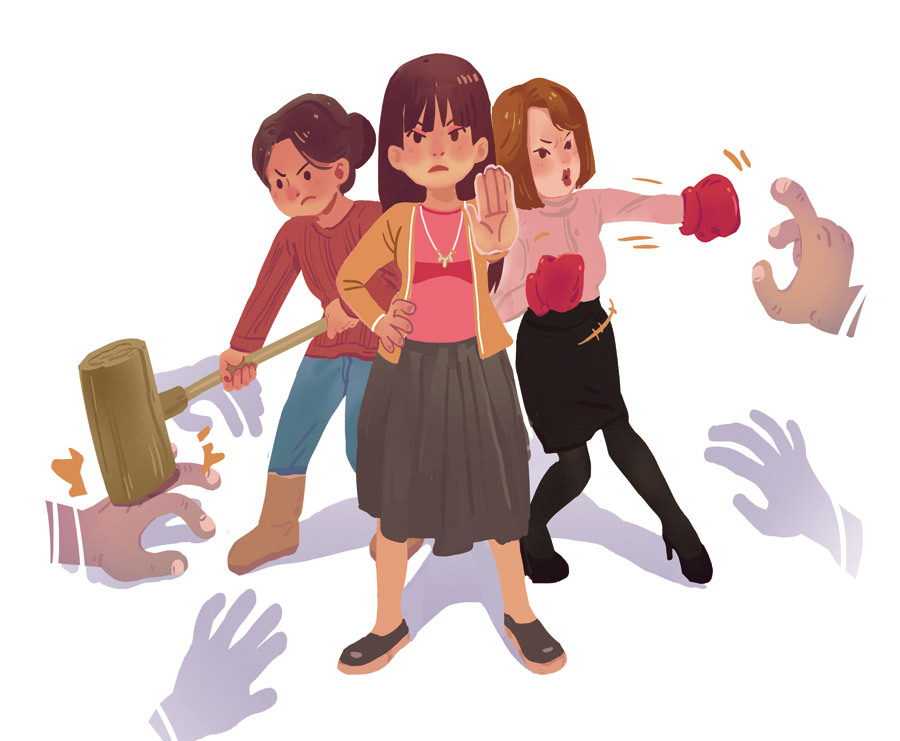 The "Guideline on Preventing Sexual Harassment in Shenzhen", released by the city women's federation and government departments including the public security and education bureaus, refines provisions related to sexual harassment in the Civil Code, which took effect on Jan 1, and clarifies how such offenses are defined, manifested and dealt with.

Compared with the article in the Civil Code, which defines the offense as "sexual harassment to a person by means of words, texts, images and physical acts, against the will of that person", the guideline specifies for the first time the three elements that constitute such an act.

The three elements are that the act is of a sexual nature, is against and unwelcomed by the subjective will of the victim and is an infringement of a person's personality rights and causes adverse psychological feelings or a hostile and unfriendly working or studying environment for the victim.

The guideline, the first to establish a mechanism to control sexual harassment, mainly applies to institutions, enterprises and schools, requiring them to set up special supervisory departments, formulate working regulations, conduct training and handle complaints and reports.

It also asks them to give offenders different levels of punishment, ranging from demanding an apology to warnings, dismissal and blacklisting, according to the severity of the case.

It says public places, including public transport, shopping malls and cinemas can implement the guideline for reference, although doing so is not mandatory. It also stipulates that such places should post "No Sexual Harassment" signs, as well as a hotline number for complaints, in conspicuous spots.

Qi Jianjian, a professor of law at the Chinese Academy of Social Sciences, said the guideline was the first to concretize legal provisions on preventing sexual harassment.

She said the concept of sexual harassment is not clearly defined in China's current laws and regulations but the guideline offers good examples to fill the gap.

The requirements for institutions, enterprises and schools to establish a working mechanism, which she described as "groundbreaking", could facilitate complaints, investigation, treatment and feedback and strengthen the practicability of legal provisions.

Li Weiwei, a law professor at Shenzhen University, said the guideline provided a very comprehensive definition of sexual harassment and was another innovation on the nation's path to improving gender equality, with the aim of guiding institutions, enterprises and other organs to reduce the occurrence of sexual harassment and raise public awareness of gender equality.

Liu Cheng, an expert from the State Council's National Working Committee on Children and Women, said the guideline demonstrates that same approach and shifts controlling sexual harassment from a private matter to a joint responsibility of individuals and public institutions.

It also promotes the establishment of a set of procedures and mechanisms capable of stopping sexual harassment at the initial stage and effectively solving difficulties in judicial evidence collection, Liu said.