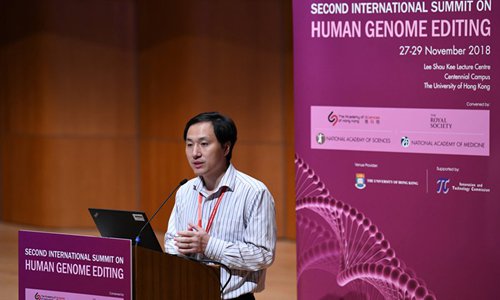 A biomedical ethics committee in Shenzhen reviewed a newly proposed regulation for conducting human-related biomedicine researches after Chinese scientist He Jiankui's claim to have edited babies' genes unveiled a vacuum of regulation in the field.

Xiao Ping, director of the Shenzhen biomedical ethics committee who presided over the meeting, told the Global Times on Thursday that they are still working on the specifics and refused to release more details.

Xiao denied the review has anything to do with the gene-edited twins experiment conducted by He, a researcher from the Southern University of Science and Technology, in Shenzhen.

Wang Ling, director of the publicity department of Shenzhen's Health and Family Planning Commission, told the Global Times on Thursday that details of the investigation into He's experiment are still being kept secret and even she does not know what's happening.

Officials from the commission also attended the meeting, according to a post on the hospital's WeChat account on Wednesday.

The review meeting was held at Peking University Shenzhen Hospital on Tuesday.

Xiao presented a plan for improving ethics standards to the attendees  who then reviewed and discussed details, said the post.

Meanwhile, the post has been deleted as of press time.

To prepare for researches in the future, ethics regulations on gene-editing should clarify high standards on ethical  review and protection of the kids whose genes are edited to prevent genetic diseases, Qiu Zong qi, the first Chinese laureate for the Avicenna Prize for Ethics in Science, told the Global Times on Thursday.

Apart from ethics regulations, an oversight system is also needed for possible clinical experimentation of genome editing in the future to enhance accountability in order to prevent violations, Qiu noted.

Huang Jiefu, former vice minister of health, also called for the establishment of a national-level authority and improved legal system to supervise biological and human experiments, noting that the controversy surrounding the gene-edited twins has had a negative impact on the international reputation of the country's bioscience sector.

He, the researcher,  made headline news around the world in late November after he was reported to have created the world's first gene-edited babies.

China bans all genetic engineering of in vitro human embryos which lasts for more than 14 days according to a regulation regarding the ethical guidance for research on human embryonic stem cells released in 2003.

The Ministry of Science and Technology said on November 29 that they had suspended the work of people involved in He's gene-edited baby experiment and would work with related departments to deal with the case based on Chinese law.