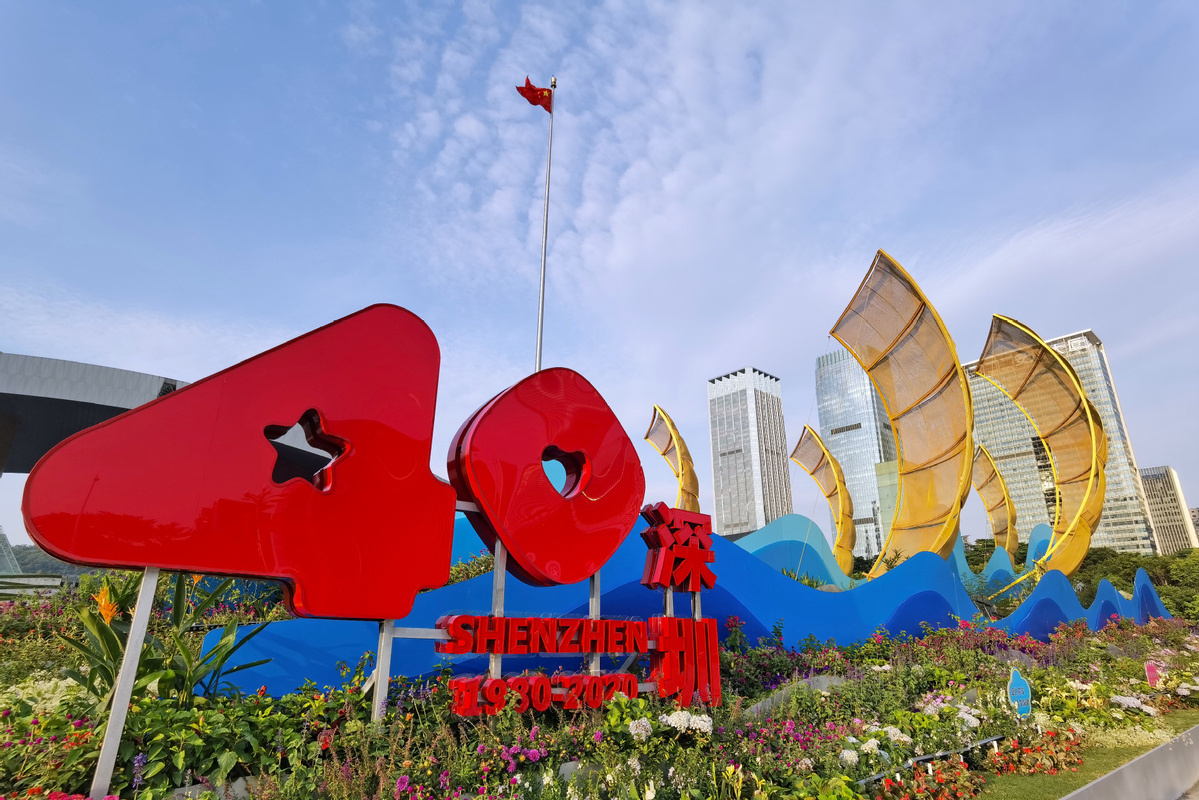 The 40th anniversary of the establishment of the Shenzhen Special Economic Zone is celebrated in Shenzhen. (Photo: Xinhua)

China's decision to establish special economic zones in the southeastern coastal cities of Shenzhen, Zhuhai and Shantou in Guangdong province and Xiamen in Fujian province 40 years ago has turned out to hold the key to its reform and opening-up drive leading to the takeoff of its economy.

And given the global economic recession as a result of the COVID-19 pandemic and the mounting uncertainty in the international landscape, analysts said innovative development of the special economic zones could play a bigger role in accelerating the formation of the new development pattern with the domestic market as the mainstay and the domestic and international markets complementing each other.

President Xi Jinping, who has paid much attention to the development of the zones, started his inspection tour of Guangdong on Monday. One of his important stops is Shenzhen, a prominent testing ground for China's reform and opening-up. There, he is expected to attend a grand gathering on Wednesday celebrating the 40th anniversary of the establishment of the Shenzhen Special Economic Zone, and deliver a speech.

Shenzhen, as one of the earliest special economic zones and a trailblazer in reform and opening-up, has special significance in China's overall development. Starting from a small fishing village, it has developed into a key economic hub that has surpassed Singapore in terms of gross domestic product. In 2019, Shenzhen's GDP topped 2.69 trillion yuan ($396.8 billion). It is also a key player in the development plan of the Guangdong-Hong Kong-Macao Greater Bay Area.

It will be Xi's third visit to Shenzhen since he became general secretary of the Communist Party of China Central Committee in 2012. A firm promoter of China's reform and opening-up policies, he has used every trip to the city to stress China's consistent efforts to carry forward reforms and open further to the world.

In November 2012, when Xi was elected general secretary of the CPC Central Committee, China's reforms entered an important phase.

Days after his election to the top Party post, Xi chose Guangdong as the destination of his first inspection tour, which took him to Shenzhen. During that trip, he said "reform and opening-up is a make-or-break move that decides China's destiny" and "there is no pause or backtracking".

He called for drawing on the experiences of Shenzhen, Zhuhai and other special economic zones, saying that their successful practices had proved that reform and opening-up is the right road.

His latest trip to Shenzhen also comes at a critical time in which China is striving to build the new development pattern in response to the current domestic and international situation.

Insiders said Xi might use the upcoming commemorative occasion in Shenzhen to reiterate the country's commitment to expand opening-up amid growing tensions with the United States, whose unilateral and protectionist policies have added mounting uncertainties to the global economy. Meanwhile, he could also highlight the role of the special economic zones in boosting the country's high-quality development in the new era.

Zheng Yougui, a researcher at the Chinese Academy of Social Sciences' Institute of Contemporary China Studies, said innovative development of the special economic zones will help the country build up new advantages in international cooperation and competition through technological innovation in order to foster emerging small and medium-sized enterprises that have a competitive edge internationally.

After decades of development, the special economic zones, which acted as the platform to introduce advanced overseas technologies and management experience 40 years ago, could become "global engines" that drive the development of advanced science and technology, and the "best windows" that showcase China's image in the new era, he said.

While helping to unleash the potential of domestic demand, they are conducive to attracting international commodities and other resources, and playing a more important role in boosting the new development pattern, he added.

China unveiled on Sunday a new comprehensive reform plan for Shenzhen to promote high-quality development of the special economic zone and build a pilot demonstration area of socialism with Chinese characteristics.

The plan, scheduled for 2020-25, gives local authorities in Shenzhen a more direct and greater say in carrying out market-based economic reform, improving market and legal environments for global businesses, building a high-level open economy, providing services for people's livelihoods, and improving the environment and urban spaces.

Chi Fulin, president of the China Institute for Reform and Development, said that as China's comprehensive reform and opening-up enters a new stage, higher-level opening-up requires institutional openness in order to abide by the trend of global development. Special economic zones could play a pioneering role in the process, he said.

Reform in Shenzhen in areas such as foreign-related commercial disputes and data rights protection will provide fresh experiences and a reference for deepening reform and opening-up nationwide, said Guo Fangda, executive vice-president of the China (Shenzhen) Development Institute.