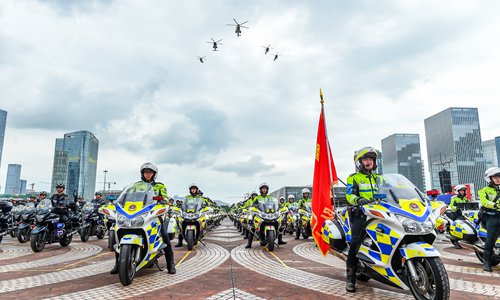 The job offers a considerable monthly salary of at least 10,000 yuan ($1,426) plus insurance and a bonus of between 2,000 to 50,000 yuan, according to the advertisement published on the WeChat account of the Shenzhen Public Security Bureau.

Analysts said that despite the recruitment is a regular staffing move, the ongoing rioting in Hong Kong may serve as a wakeup call for Shenzhen and other metropolis worldwide to replenish their staffing needs and boost their force to help maintain public order and contain activities endangering social safety.

According to the job description, most of the auxiliary officers recruited will be assigned to carry out security patrol-related duties across the city, and some will be allocated to investigation teams to help with law enforcement.

Unlike most official organs, the Shenzhen police took a more lighthearted approach in its advertisement.

"Your previous job may bring you flabby muscles, here we help you get V-cut abs. Don't leave any regrets for your youth because you're fat!" reads the advertisement.

"Today's Shenzhen is welcoming another opportunity with the Guangdong-Hong Kong-Macao Greater Bay Area and a pilot demonstration area of socialism with Chinese characteristics as it was 40 years ago. Choosing today's Shenzhen, you choose infinite possibilities in the future!" said the advertisement.

The recruitment is the second this year. Shenzhen police recruited 2,300 auxiliary police officers in February for security patrols, investigations and law enforcement.

Fan Peng, a member of the Chinese Association of Hong Kong & Macao Studies, told the Global Times that the recruitment of auxiliary police in Shenzhen is a regular recruitment to cope with the long-standing shortage of police nationwide.

However, experts also believe that the ongoing rioting in Hong Kong has rung an alarm bell in Shenzhen and other large cities worldwide.  Shenzhen, as a neighboring city of Hong Kong, could send support forces to help Hong Kong end its violence if needed.