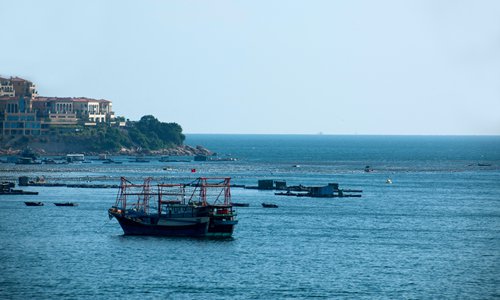 The southern Chinese city of Shenzhen, the country's first special economic zone, confirmed with the Global Times on Wednesday that it has started soliciting public opinion for a draft regulation that will allow the city's sea areas to be developed for commercial purposes.

The draft regulation applies to the city's vast sea area of 1,145 square kilometers, read the statement.

As part of its 13th Five-Year Plan for the 2016-2020 period, China aims to build Shenzhen into a global maritime hub, together with other major coastal cities like Shanghai, according to a maritime economic plan jointly issued by the National Development and Reform Commission and the State Oceanic Administration in May 2017.

These global maritime hub cities are being designed to further enhance the country's international influence in sectors including, but not limited to, investing and financing, trade and business tourism, and to become the main force and pioneers for the country's 21st-Century Maritime Silk Road initiative, read the document.

Generally, Chinese laws regarding sea areas stipulate that rights to use them can be obtained through bidding or auctions. Once this process is completed, the certificate for the right to the use of sea areas will be issued to the winning bidder or the vendee, who obtains the right to use the sea area from the date he receives the certificate.

However, so far, no market for the use of sea areas has been established, and neither has a system for transferring such rights. The draft regulation aims to fill in these blanks.

Previously, the lack of specific regulations has caused problems including the shrinking of sea areas and a drop in maritime environmental quality, affecting the city's sea management work, read the statement.

The draft regulation explicitly states that Shenzhen local maritime authorities are to formulate plans for auction and bidding processes for the sea areas and then make the plans public.

For areas outside those designated in the plan, when land reclamation is involved, public bidding and auction can directly be applied in how land use is determined. Projects involving land reclamation must be for the city's infrastructure projects, public services or major maritime industrial programs approved by the municipality.

Applicants must pay a sea area use fee in advance.

Unapproved land reclamation acts, once discovered, will be ordered to stop, and illegally developed sea areas must be returned. Those who violate the regulations will also face a fine of 20 times the sea use fee, and these infringements will be recorded in the social credit system.

The draft follows the principle of "environmental protection comes before development," and also attaches great emphasis on control and prevention of maritime pollution. It stipulates that Shenzhen citizens found dumping waste into sea areas will face a fine up to 500,000 yuan ($79,024), and could even have their business licences revoked.

"The use and development of sea areas, to some extent, will have an irreversible impact on the maritime ecological environment, and once the damage is done, it is almost impossible to recover," Wang Xiaobo, an employee at the Shenzhen municipal office of legislative affairs, told the Global Times.

Because of this, the draft has set harsh penalties to deter damaging acts and illegal and unauthorized sea area use, he added.

An information sharing platform will also be established to monitor maritime use dynamics, covering all of the city's sea areas.

As of Monday, the office has received five feedback items from the public, with most advising that the local authorities strictly control land reclamation acts and reduce development activities that may damage the maritime ecology.