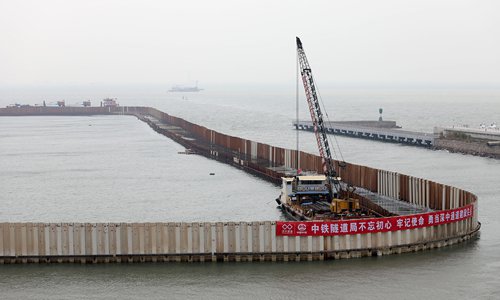 The Shenzhen-Zhongshan Bridge, a massive infrastructure project within a one-hour radius of the Guangdong-Hong Kong-Macao Greater Bay Area, is even more challenging than the Hong Kong-Zhuhai-Macao Bridge and its construction will generate more technical references and experience for the world, according to analysts.The project includes construction of a bridge, artificial islands and tunnels, with work both on and under the water, said a report posted on the WeChat account of the State-owned Assets Supervision and Administration Commission of the State Council (SASAC) on Monday.Such a complicated project is bound to bring new challenges and push the construction team to come up with new solutions that will assist in the construction of similar projects around the world, said Song Ding, a research fellow at the Shenzhen-based China Development Institute.The Shenzhen-Zhongshan Bridge will use the key technology of immersed tubes like the Hong Kong-Zhuhai-Macao Bridge project, but to secure the transportation and installation of the tubes, a 500 million yuan ($75 million) ship was built, said SASAC's report."The tube factory was built for the former project. Now the transportation distance to the new site is three times further," said Ning Jinjin, the deputy chief engineer of CCCC-First Harbor Engineering Co. "It's an innovation in the world's shipbuilding industry without any prior reference.""We need to produce 22 immersed tubes in about two years. Nobody in the world ever did that before," said Ji Ting, the deputy chief engineer of CCCC-Fourth Harbor Engineering Co.The difficulty of joining immersed tubes is similar to linking two medium-sized aircraft carriers together, and the deviation needs to be within 5 centimeters, SASAC's report said.The Shenzhen-Zhongshan Bridge also needs two artificial islands and the steel rebar consumption of the two islands will amount to that of six Eiffel Towers.For such significant infrastructure projects in China, it has become the new normal that such challenges emerge. Song told the Global Times on Monday that China has established many technological references and standards for the world.Su Quanke, chief engineer at the Hong Kong-Zhuhai-Macao Bridge Authority, said that 61 industrial standards were established during the project, and some of those standards are likely to become world standards, domestic news site bjyouth.ynet.com reported on March 7.The chief of the International Association for Bridge and Structural Engineering has come to see the Hong Kong-Zhuhai-Macao Bridge several times and given strong recognition to the project. The International Tunneling and Underground Space Association also hopes that some of the special technical standards can become international standards, Su added.The 24-kilometer bridge that will connect Shenzhen and Zhongshan in South China's Guangdong Province in 2024 will bring revolutionary changes to the region, promote the integration of the Greater Bay Area, and support the transformation of the local economy and its cities, Song said.