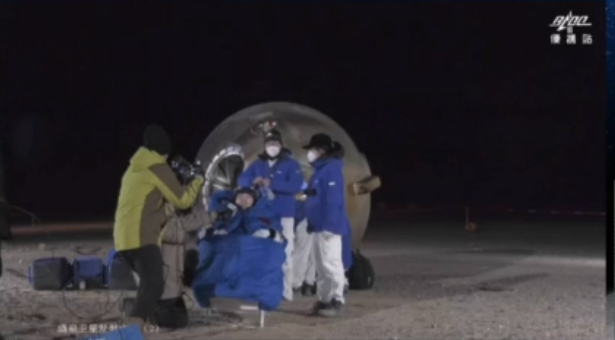 BEIJING, Dec. 4 (Xinhua) -- Three Chinese astronauts on board the Shenzhou-14 manned spaceship returned to Earth safely on Sunday, after accomplishing many "firsts" during their six-month space station mission.

The astronauts were all in good physical condition, and the Shenzhou-14 manned mission was a complete success, the agency announced.

They were carried out by ground workers and placed onto chairs in front of the capsule. They looked relaxed and waved to the ground crew.

"Welcome back home," people cheered for the trio, as many raised their cameras to capture the historic moment.

"I am honored to witness the formation of our space station's basic configuration," said Chen, the mission commander, also the first Chinese astronaut to stay in orbit for over 200 days. "I am proud of my country."

Liu, China's first female astronaut, said she had an unforgettable memory in the space station and is excited to return to the motherland.

The return capsule separated from Shenzhou-14's orbiting capsule at 7:20 p.m. on Sunday under the command of the Beijing Aerospace Control Center.

Soon after the return capsule landed, the ground search team arrived at the landing site. Medical personnel confirmed that the astronauts were in good health.

It is the first time for China's manned spaceship to return to the Dongfeng landing site on a winter night. According to the agency, the "rapid return mode" that Shenzhou-14 used led to fewer circles around the orbit and shortened the return flight time.

The Chinese research team has also developed many innovative technologies to help the Shenzhou-14 crew overcome the challenges of low temperatures and the dark night.

They carried out space station platform inspections and tests, equipment maintenance, as well as the management of materials and the space station. They also unlocked and installed scientific experiment cabinets in lab modules Wentian and Mengtian.

The Shenzhou-14 astronauts helped accomplish many "firsts" in China's space history, including the first rendezvous and docking between two 20-tonne-level spacecraft and the first in-orbit transposition of a space station module.

They are the first crew to enter the space station's two lab modules, and they set a record of making three spacewalks on a single flight mission.

They also helped realize the world's fastest automated rendezvous and docking of the cargo craft Tianzhou-5 with the space station in about two hours.

The trio conducted an in-orbit rotation with the Shenzhou-15 crew, a historic gathering that added the workforce at the in-orbit space station to six for the first time.

The Shenzhou-15 astronauts, who are tasked with wrapping up the final stage of space station construction and kicking off the first stage of its application and development, will verify long-term residence on China's space station in its three-module configuration, the agency said.