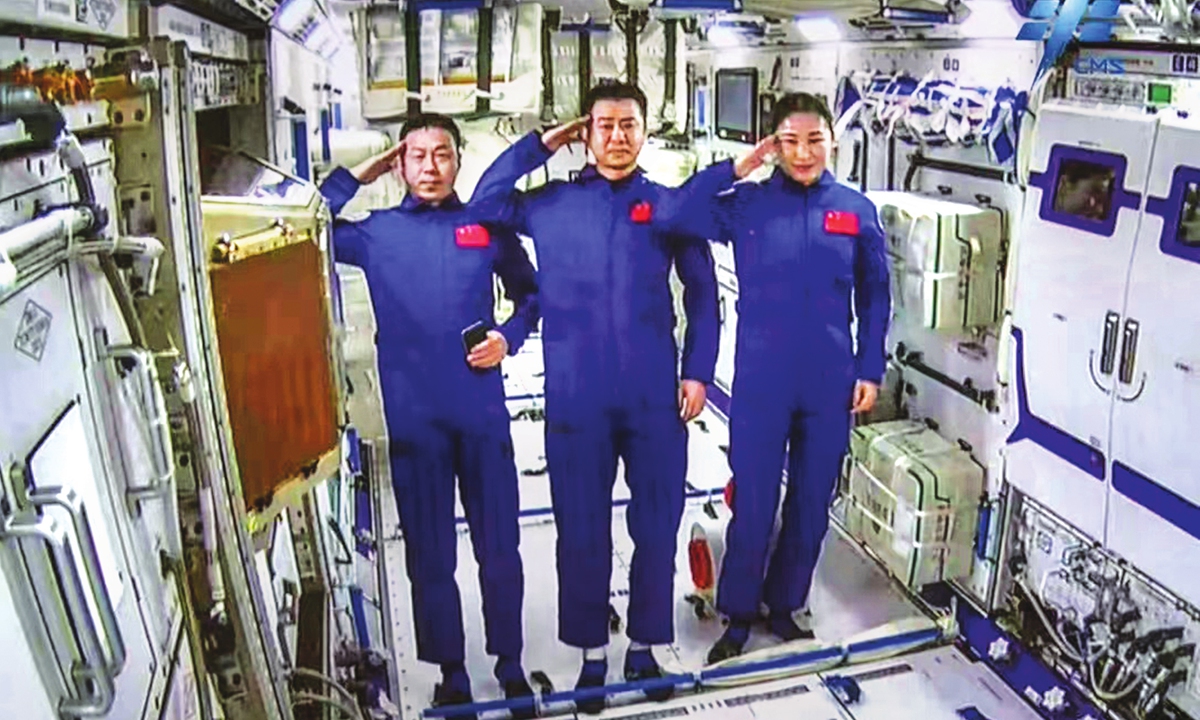 The Shenzhou-14 crew members, Chen Dong (center), Liu Yang (right) and Cai Xuzhe salute from the Wentian (Quest to The Heavens) lab module on July 25, 2022 from some 400 kilometers above the Earth. The three taikonauts checked in to their office and home unit in space at 10:03 am. Photo: cnsphoto

The Shenzhou-14 crew of three taikonauts, who watched live the epic launch of the Wentian [Quest to The Heavens] lab module from some 400 kilometers above the Earth and cheered it on with applause on Sunday, did not wait long to check into their office and home unit in space, as they opened the gate of the freshly docked new module and entered the Wentian at 10:03 am on Monday, the Global Times learned from the China Manned Space Agency (CMSA).

It was a historic first that the taikonauts entered the scientific lab module in orbit, the CMSA noted in a statement it provided to the Global Times on Monday morning, while disclosing that the crew shall execute missions including space station combination attitude control, verification of robotic arms, and use of the Wentian airlock and its small robotic arm to perform spacewalks under the plan.

The Wentian lab module conducted a smooth rendezvous and docking with the China Space Station's Tianhe core module at the front port at 3:13 am on Monday, some 13 hours after it was launched via a giant Long March-5B carrier rocket from South China's tropical island province of Hainan.

It was a first for two pieces of 20-ton level spacecraft to execute the "heavenly kiss" in the country's history, and it also marked an unprecedented milestone event that took place while the China Space Station combination was carrying taikonauts onboard, the CMSA announced.

Before China, only the former Soviet Union and the US were capable of assembling ultra-large spacecraft in orbit.

Designed mainly to support space science and biology experiments, the 23-ton Wentian lab module is heavier than any other single-module spacecraft currently in space, including those with the International Space Station (ISS), the Global Times learned from the mission contractor, the state-owned space giant China Aerospace Science and Technology Corp (CASC).

The Wentian also hosts eight experimental cabinets onboard. It will mainly focus on the study of space life sciences, which can support the growth, development, genetics and aging of multiple species of plants, animals and microorganisms under space conditions, Lü Congmin, a research fellow at the Chinese Academy of Sciences and deputy chief designer of the space utilization system of China Manned Space programs, told the Global Times.

More than 10 research directions have been planned and more than 40 scientific projects have been established for the Wentian, Lü said.

To meet the high energy requirements for the large number of scientific experiments in space, the Wentian is equipped with a pair of the largest flexible solar panels that the country has ever developed. 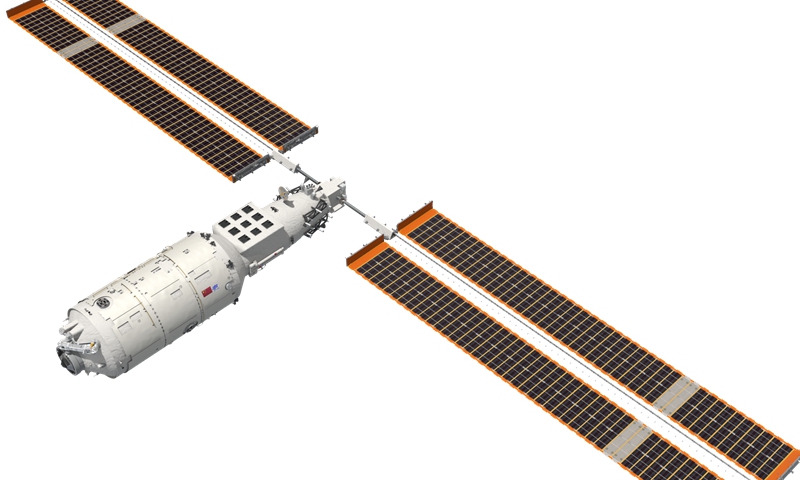 The full wingspan of the solar panels on the Wentian is more than 55 meters, longer than half a soccer field, and each panel has an unfolded area of about 110 square meters. Photo: Courtesy of CASC

The full wingspan of the solar panels on the Wentian is more than 55 meters, longer than half a soccer field, setting a new record for solar panels used for China's spacecraft. Each panel has an unfolded area of about 110 square meters, the Global Times learned from the developers.

The two solar panels will effectively collect more solar energy, generating an average of more than 430 kilowatt hours per day and providing sufficient power for space station operations. If placed on Earth, the daily power generation of the solar panels would be enough to support the power demand of an average Beijing household for a month and a half.

During the "heavenly kiss," the enormous wings of the Wentian unfolded in two stages by plan, where the solar panels were only partially unfolded to sustain the power supply needed during the docking and became fully unfolded afterwards, which was done to avoid any damage from the impact of two giant modules with fully unfolded wings.

Explaining to the Global Times, the solar panel system developer, the Shanghai Academy of Spacecraft Technology, said that if the Wentian's wings were unfolded all at once, it would be approaching the Tianhe core module with one giant sail on each side. In that case, even trivial shaking of the sail would affect the control precision of the velocity, relative location and attitude control of the Wentian, so that it would add difficulties to its safe rendezvous and docking with the Tianhe module.

The Global Times learned from the Second Academy of the China Aerospace Science and Industry Corp (CASIC) that microwave radar developed by the academy's 25th institute also played a guiding role in the rendezvous and docking process.

Also, the Wentian is equipped with a urine recycling system developed by the CASIC's second academy Institute 206, the second of its kind onboard the China Space Station combination. The first was installed on the Tianhe core module and successfully supported the space stays of the Shenzhou-12 and -13 crews. The urine recycling system on the Wentian will serve as a backup for the Tianhe, the CASIC told the Global Times.

According to the official plan, the Mengtian, another space lab, will be launched in October.

And before that, the Wentian will move to the right side of the Tianhe core cabin, forming an L-shaped structure, China Space News, the official joint news outlet of the China Aerospace Science and the Technology Corp and the China Academy of Space Technology, reported. For this to happen, the Shenzhou-14 taikonauts will perform three complex steering maneuvers to adjust the Wentian to a vertical position with the help of the robotic arm.

In the coming months, people on Earth will be able to witness the construction of the China Space Station, which will be completed at a speed that has no precedent in mankind's history.

The first ever space station in history, the Salyut 1, launched by the former Soviet Union, had its core module delivered into orbit in 1986. In 10 years' time, the station completed the assembly of six modules with a total weight of 130 tons.

Construction began on the ISS in 1998 and took 12 years, with the coordination of 15 countries, to build its 15-module structure.

The China Space Station is planned to become fully operational before the end of 2022, aiming to accomplish the in-orbit assembly of the country's most ambitious program in less than one year and a half since the launch of the Tianhe core module in April 2021.