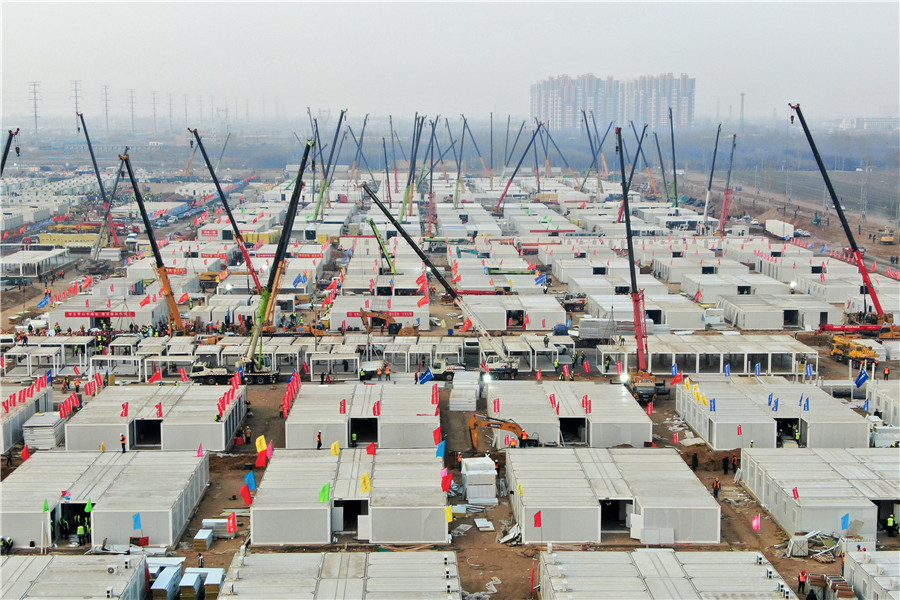 Aerial photo taken on Jan 20 shows a centralized quarantine facility, Huangzhuang Apartments, is being built in Shijiazhuang, the capital of Hebei province. The centralized quarantine facility, with an area of 43.87 hectares, is scheduled to have 4,156 rooms in total. The decision to build the facility came on Jan 12 as Hebei faced an increase of confirmed cases. As of Tuesday, 606 rooms have been delivered. (Photo: China Daily)

Shijiazhuang, capital of Hebei province, has put 34,029 people at higher risk of infection in 458 centralized quarantine centers across the city, in order to cut down further spread of the ongoing COVID-19 epidemic, the city's vice mayor Meng Xianghong said on Thursday afternoon during a news conference.

"Considerate services will be provided to them during the quarantine," she said, adding elders and children will receive as much care as needed and people suffering from other diseases can get treated in the quarantine centers.

A 24-hour hotline is open for consultation on psychological and any other problems, Meng said.

The quarantined are mainly close contacts of positive results and also secondary close contacts. They will receive nucleic acid testing every other day.

A new facility is being built in the city to function as a centralized quarantine center, with over 4,000 rooms available after completion.

Shijiazhuang confirmed 14 new local COVID-19 patients and an asymptomatic carrier by midday on Thursday, 10 of whom are from Gaocheng district, the worst-hit place in the city, she said.

"The new cases emerged in recent days have decreased greatly and most had been in centralized quarantine before detection," Meng said.

After the new rise, the city has reported 813 confirmed cases and now has 173 asymptomatic carriers under medical observation, accounting for most of Hebei's total.

Eight patients were discharged from hospitals on Thursday, Meng added. After the new recoveries, the city had discharged 25 COVID-19 patients from hospitals and released 40 asymptomatic carriers from medical observation. There was also one death from the disease.

All had been transferred to a designated hospital in the city for a 14-day centralized quarantine and further medical observation.