Maersk, the world's leading container shipping company, on Monday confirmed five crew members aboard the Gjertrud Maersk container ship have tested positive for the novel coronavirus, casting shadows over the possible impact on China's shipping industry amid the growing pandemic. 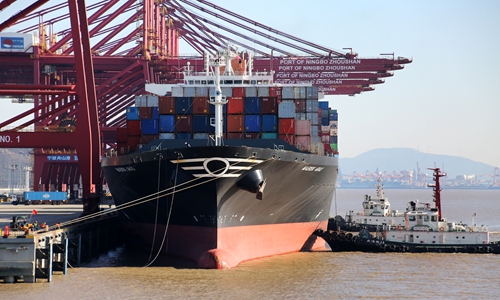 A container ship of Maersk is docked at Ningbo Zhoushan Port. (Photo: cnsphoto)

A source close to COSCO Shipping told the Global Times on Monday that the impact is yet to be seen. But she said that information might not be available in a timely manner, since operations and inspection procedures have become more complicated amid the outbreak.

"Most countries require 14 days of quarantine, but not all of them," she said, noting that to prevent the spread of the deadly virus, the line's crew members do not get off ships after arriving at ports.

Luo Renjian, a research fellow at the Institute of Transportation Research at the National Development and Reform Commission, told the Global Times on Monday that although the Chinese government is trying to keep ocean shipping open, there are challenges.

"Although the outbreak has eased in China, the spread of the global outbreak has caused new issues with overseas shipments, including port shutdowns enforced by some countries," Luo said.

Another challenge for shipping companies is the possibility that the freighters will be empty on their return trip, since there is no cargo to be loaded on board at some countries' ports amid the crisis.

To avoid the spread of the virus, the Ministry of Transport (MOT), together with other relevant departments, is overseeing the crew changes to ensure international shipping order and to carry out relevant disposal work in accordance with laws and regulations.

The crew members are in stable conditions, and 15 others are under observation aboard the ship in normal conditions.

"I don't think there will be a global shipping shutdown. Because although countries restrict the entry of people, they have not yet restricted the entry of goods," he said.

Maersk had not responded to the Global Times' interview request as of press time.

The report was confirmed by the MOT on Monday. According to a statement from the MOT, the Danish container ship arrived at an anchorage outside Ningbo on March 17, and the ship's agent reported problems with the crew on March 18. Customs officers boarded the ship on March 20 to initiate a quarantine check-up, and found seven crew members in abnormal conditions.

Zhejiang Province and port inspection departments across China have attached great importance to the case, and have discussed the treatment plan for the crew involved. While the ship was docked at Ningbo, it was thoroughly disinfected.