A safe and special reunion has recently peaked public attention. In the photo, a nurse is eating on the side of the road one meter apart from a man in Pajamas who also has a child in his arms.

The nurse’s name is Jiang Shie and she works in the Central Hospital of Dianzi Town in Xunxi County of Shiyan, central China’s Hubei Province. 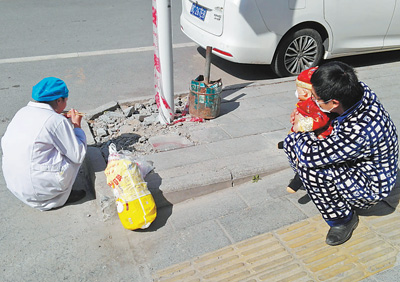 On February 19, her husband and nine-year-old child came to meet her at the gate of Hedongxiang Community in Xunxi County. The moving scene was recorded by Chen Wei, a cadre from the County Finance Bureau.

According to Chen, he was on guard at the check point of the gate for the Hedongxiang Community. Jiang’s husband holding their child wanted to pass the point to meet his wife.

Ten minutes later, Jiang walked down from an ambulance. On seeing her child, she subconsciously wanted to hold the child but controlled herself.

In light of her busy schedule, Jiang ate the meal brought by her husband on the roadside, while her husband and child stayed one meter away.

On the morning of February 19, Jiang and her colleagues went to County Health Bureau for work and seized the chance to go home. This short meeting was the first reunion of her family in the last month.

Jiang had returned to work right after Spring Festival and hadn’t been home for 25 days. She and eight other nurses stuck to their positions to fight the epidemic and worked with the guards at check points.

A person moved by her story donated an ambulance to her hospital, showing appreciation for her work.