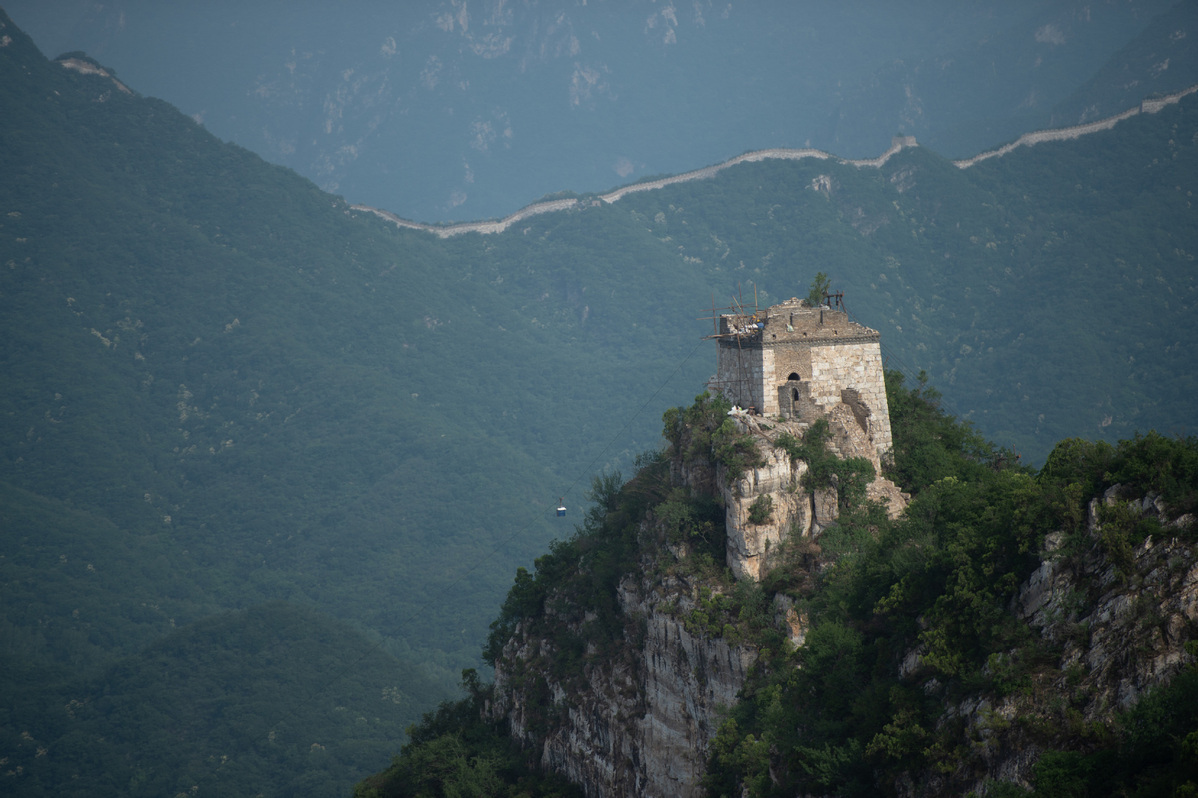 Regarded as the largest and greatest fortification system in China's history, the Great Wall was built across the country during different dynasties to protect its territories and resist invasion from various nomadic groups. (Photo/Xinhua)

It all happened in a series of clicks. Holding his breath, Li Peng squatted down and pressed the shutter button successively as he focused his camera on a beacon tower at the ancient Great Wall, standing beneath a starry sky.

Minutes later, Li scrolled through the photos he just took, picked out one of his most satisfying clicks and jotted down a caption for the picture -- "looking into the star-studded sky."

"The images of Great Wall in different seasons and at varied times provide people an opportunity to reach out to its long history," the 46-year-old said.

The Great Wall, a UNESCO World Heritage Site, consists of many interconnected walls. Regarded as the largest and greatest fortification system in China's history, the Great Wall was built across the country during different dynasties to protect its territories and resist invasion from various nomadic groups.

Research shows there is 1,038 km of the Great Wall remaining in Ningxia.

As a researcher from the Ningxia Museum and a voracious photographer, Li has been taking photos of the Great Wall for the past 20 years.

Li's odyssey with the camera started around 1998 when he began documenting a section of the ancient Great Wall in Qingtongxia City, his hometown. At that time, he was working with the city's cultural relics administration department.

"Back then, in my spare time, I often got up in the middle of the night and tramped over mountains and through ravines for hours to photograph the ancient Great Wall," he said.

Li can't remember exactly how many pictures he had taken of the ancient Great Wall.

However, what he does remember is the general condition and details about the Great Wall through his more than 20 years of researching and photographing experience.

"Ningxia not only has a wide range of architectural remains of ancient Great Wall, including the remaining walls, beacon towers, trenches and passes, but also has abundant natural features alongside, covering high mountains, deserts and grasslands," Li noted.

Shutterbugs, like Li, deem capturing the views of the Great Wall as a way of preserving its heritage.

Chen Jing, 50, is another avid photographer. She is a teacher at a vocational school and initially began her rendezvous with the Great Wall through a borrowed camera. Now, she has purchased a professional camera and various lenses. Chen has even obtained a commercial drone license to nurture her hobby better.

"I'm a native of Yanchi county. My father has authored books on the 260-km section of the ancient Great Wall in the county. At first, I just wanted to bring back the photos of Great Wall to him as he is too old to conduct an on-site investigation," Chen said.

Chen added that the more photos she took, the more duty-bound she felt to document the section.

Last year, Chen and her husband published a collection of pictures taken over the past nearly 10 years with financial support from the county government.

"It was arduous but worthwhile," she said, recalling the grueling days when she and her husband had to sleep in a tent during their frequent outings.

Li said that mining activities alongside a section of the Great Wall at the eastern foot of the Helan Mountains used to pose threats to its historical features. However, in recent years, Ningxia has ramped up efforts to protect the Great Wall by shutting down mines and restoring remains of the Great Wall.

Last year, the Ministry of Culture and Tourism and the National Cultural Heritage Administration jointly released a comprehensive conservation plan for the preservation and utilization of the Great Wall.

When Li was transferred to the Ningxia Museum in 2018, he launched a campaign to solicit pictures of the ancient Great Wall in Ningxia. More than 200 shutterbugs from across the region contributed some 1,800 photographs.

He then hosted an exhibition based on the works he collected. So far, more than 100,000 people have visited the exhibition that has spanned for more than a year and a half.

"It is of great significance to unfold the cultural landscapes of the Great Wall and to pass on and carry forward the connotations of the 'Great Wall spirit' like grit and persistence," said Li.