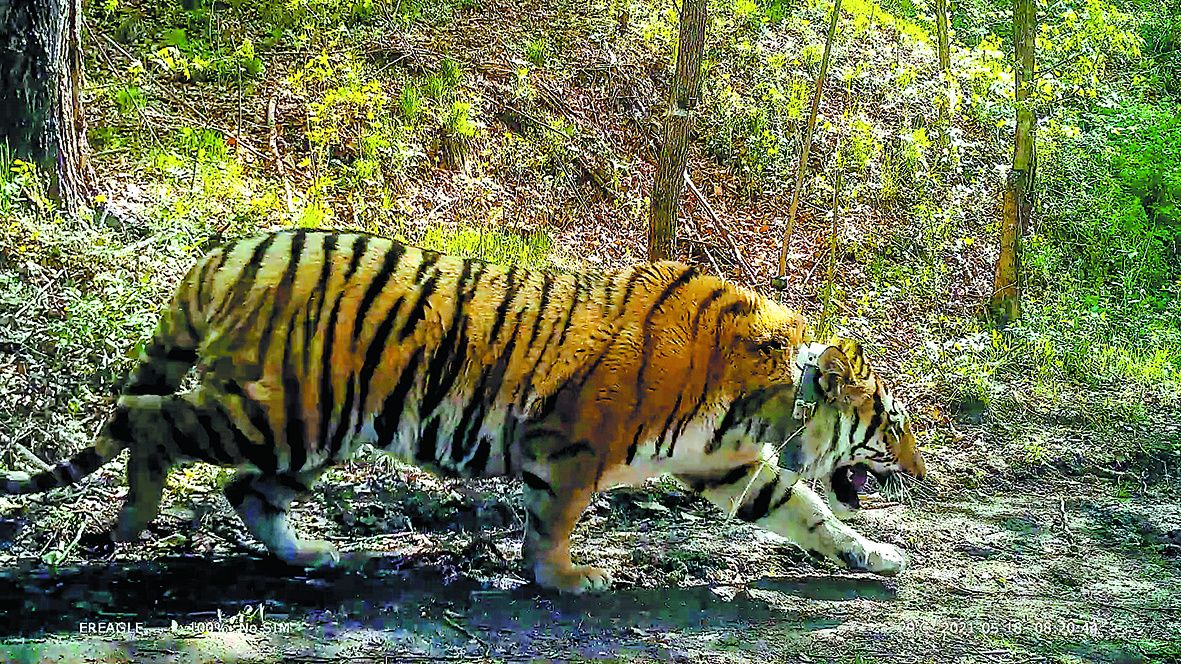 A video grab shows a Siberian tiger released in Laoye Mountain after it was rescued in May. It was the first time China successfully rescued and released a wild Siberian Tiger. (Photo: Xinhua)

The study was the work of a team led by Jiang Guangshun, deputy director of the National Forestry and Grassland Administration's Feline Research Center, and experts from the Wildlife Conservation Society, the World Wildlife Fund, the University of California and the Heilongjiang Wildlife Research Institute. It was published in Biological Conservation, a journal associated with the Society for Conservation Biology, an international nonprofit organization.

"With most large carnivore populations and habitats suffering massive declines across the world, efforts to restore populations in the wild are of high conservation priority," Jiang said.

Researchers set up 2,400 infrared cameras in a 47,813-square-kilometer area covering Laoye Mountain, Zhangguangcai Mountain, Wanda Mountain and the Lesser Hinggan Mountains in the provinces of Jilin and Heilongjiang.

"China attaches great importance to protecting wild Siberian tigers and has made considerable progress toward this goal, but most efforts have been focused on Laoye Mountain," Jiang said. "During the six years of research, we assessed these four major forested areas in Northeast China, which may be suitable for tigers."

Cameras captured a total of 52.8 million hours of film. The study also examined 146 fecal samples and 122 paw prints and tracks.

"Cameras were set in pairs to record the patterning on both sides of the tigers," Jiang said. "And then digital and manual observation was used to identify them."

After comprehensive analysis of the data, experts identified 55 Siberian tigers, including 20 cubs.

"The number of adult tigers increased to 33 in 2018 from seven in 2013. Conservation has had a significant effect," Jiang said. "The increase of tigers is associated with a series of policy changes, such as the decrease in human density in the area due to a relocation project.

"Furthermore, the environment has greatly improved since a natural forest protection project started in 1998 and all commercial logging was stopped, which helped protect the tigers."

At the same time, increased tiger populations in the neighboring Russian region of Southwest Primorye also greatly contributed to the recovery of the Siberian tiger population in Laoye Mountain through cross-border movement.

The successful reestablishment of tigers in Wanda Mountain and the Lesser Hinggan Mountains also greatly benefited from the recovery of the tiger populations in Russia's Sikhote-Alin and its Jewish Autonomous Oblast, the study said.

"Against the current global trend of the sharp loss of tiger habitats, China's Siberian tiger population and habitats have great potential for recovery, and China will become the most promising country in terms of global tiger distribution," Jiang said. "Creating a viable metapopulation connecting all four areas in Northeast China with tiger habitats in Russia seems to be the only approach to realize the full recovery and sustainable survival of wild Siberian tigers in China.

"However, we are facing great challenges in establishing a single, interconnected trans-boundary metapopulation. The protection of the Siberian tiger requires the establishment of a network of protected sites, the construction of international and domestic corridors and the formation of a permeable landscape. It needs attention and support from all over the world."