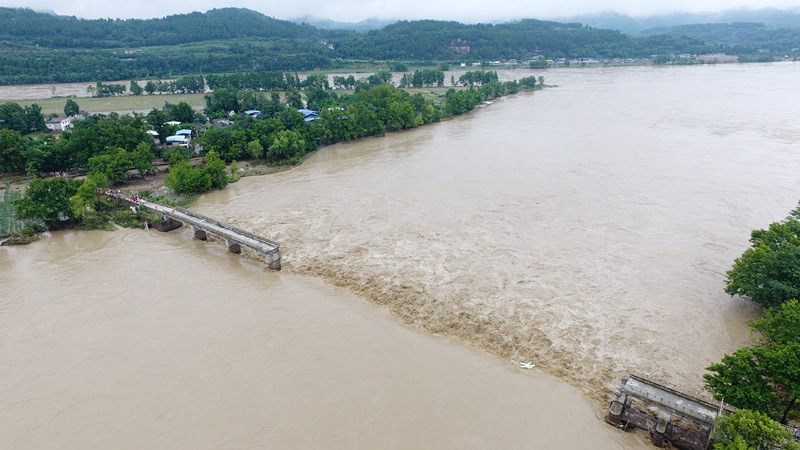 Floodwaters of the Fujiang River flow through the gap in the broken Heishuihao Bridge in Shehong county, Sichuan province, on Thursday. A sand mining ship struck the bridge earlier at the flood's peak, making the village of Heishuihao an isolated island. (Photo: Liu Changsong/China Daily)

Gansu province was hit even harder, according to the Ministry of Emergency Management.

The floods, caused by heavy rainfall that started on Saturday, have toppled more than 600 homes, damaged nearly 8,800 dwellings and triggered the evacuation of 101,000 people in Sichuan. A total of 36,900 hectares of crops have been affected by the floods and 5,200 hectares will have no harvest this year, the ministry said.

In addition, 12 people have died in neighboring Gansu province, four have gone missing and more than 1 million people in 44 cities, districts and counties have been affected by flooding that started on Saturday. Direct economic losses there are estimated at more than 1.4 billion yuan so far.

The Ministry of Finance and Ministry of Emergency Management allocated 180 million yuan in subsidies to Fujian, Zhejiang and Jiangxi provinces on Thursday.

Since the flood season started on May 1, precipitation in Sichuan, which is situated in the upper reaches of the Yangtze River, has been 40 percent above average, the provincial flood control and drought relief headquarters said.

The headquarters organized emergency response teams on Wednesday afternoon and worked with reservoirs in the upper reaches of the river to reduce the pressure that floods have brought to Chongqing municipality and southwestern Sichuan.

So far, around 52,000 Chongqing residents affected by floods have been relocated to safer places.

The water level in 27 sections of the Dadu, Fujiang, Minjiang, Jialing, Tuojiang and Yalong rivers has exceeded the warning line.

Five hours later, the floods receded and the bridge stood firm, said Xia Yongjing, an information officer with the company.

A thunderstorm lasting from 10 pm on Tuesday to 3 am on Wednesday stranded nearly 10,000 passengers in the Shuangliu International Airport in Chengdu, Sichuan. 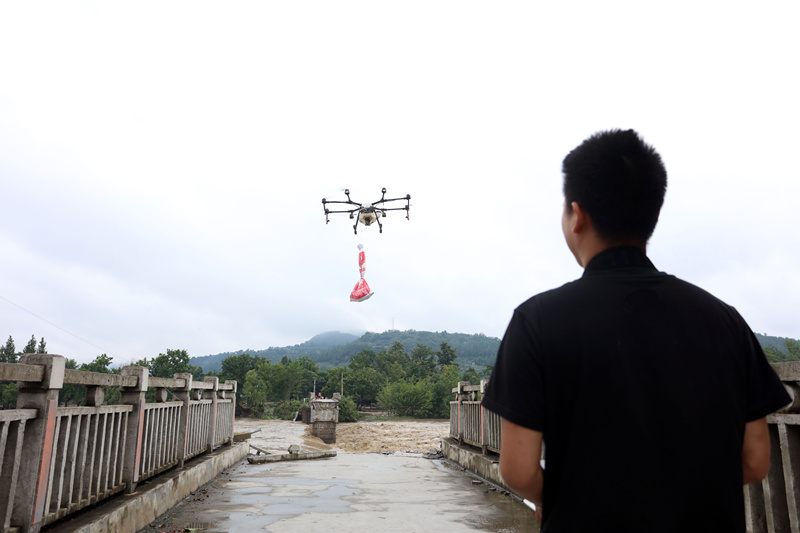 A drone delivers relief supplies to residents of Heishuihao village in Shehong county, Sichuan province, on Thursday, as the only bridge linking to the outside was destroyed in the flood. (Photo: Liu Changsong/For China Daily)