CHINA Silent carriers are infectious, must be reported within 2 hours after discovery: State Council

Silent carriers are infectious, must be reported within 2 hours after discovery: State Council

China's State Council on Wednesday published new regulations on the management of silent coronavirus carriers, specifying that the group are infectious and have risks of transmission, amid mounting public worries over whether lifting Wuhan's lockdown would cause a second outbreak due to mass population flows. 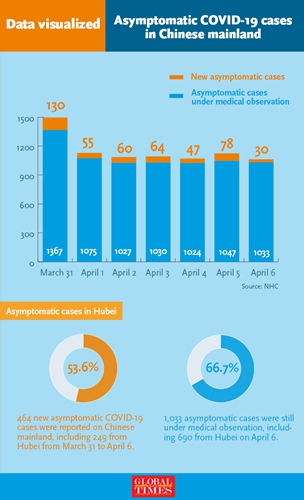 The regulations standardize the process of reporting silent carriers, requiring nationwide medical institutes to report within two hours via the internet after discovering any such case. County-level disease prevention and control authorities should complete investigations into each single case within 24 hours and record close contacts. Local medical institutes should also record the date they are discharged from medical observation in a timely manner.
The State Council also stipulates that for asymptomatic patients who have been released from medical observation, further medical observations and follow-ups shall continue for 14 days. They should also visit designated hospitals for follow-up re-examinations in the second and fourth weeks.
The newly unveiled policy, specially designated for tackling asymptomatic cases, aims to fend off risks of a rebound COVID-19 epidemic in China and avoid new large-scale infections caused by asymptomatic patients, Cai Jiangnan, director of the Center for Healthcare Management at the China Europe International Business School, told the Global Times on Wednesday.
Asymptomatic patients are defined as those who display no clinical symptoms such as fever, cough, sore throat but test positive for COVID-19 in the respiratory tract and through other specimens.
Monitoring has shown that asymptomatic patients are mainly discovered from five channels: medical observation of people who have had close contact with COVID-19 patients; investigation of cluster epidemics; tracking of infection sources; tests on people who have had a travel history or residence history in epidemic areas at home or abroad and people who were identified in epidemiological investigations and opportunistic screening.
The State Council also emphasized to enhance information disclosure. Administrative departments and health authorities should report on asymptomatic cases on a daily basis, and each province (region and municipality) should publish statistics of domestic and imported infections respectively.
Amid growing public concerns over silent coronavirus carriers, China's State Council has added a new function in its service program on WeChat for Chinese people to check if they have ever sat near a confirmed silent virus carrier on trains and planes.
Asymptomatic patients will be quarantined collectively for 14 days and undergo two nucleic acid tests. If the nucleic acid test remains positive, isolated medical observation will be continued. Asymptomatic patients will be counted as confirmed cases once they start to show clinical symptoms and should be sent to designated hospitals for treatment. People who have had close contact with them are also required to be quarantined for 14 days.
The State Council also issued documents strengthening management of recovered and discharged patients. Designated hospitals should arrange a 2 to 4 week re-examination plan for discharged COVID-19 patients, focusing on re-examinations of blood routine, biochemical and oxygen saturation, re-examination of novel coronavirus pathogens, and priority is given to selecting sputum specimens with higher reliability, according to a document issued by the State Council.
If discharged patients re-test positive with clinical manifestations such as fever and cough, in addition with CT imaging showing that the lung lesions are aggravated, they would be classified as confirmed patients and transferred to a designated hospital as soon as possible for further treatment.
In interviews with the Health Times, a newspaper under the People's Daily, four top Chinese health experts have eased public concerns over whether lifting the lockdown in Wuhan will cause a second outbreak of the coronavirus.
"Easing of the lockdown means that Wuhan has been catching up with the pace of virus battles in other Chinese cities. But it does not mean we can take a break yet," said Zeng Guang, an expert at China's National Health Commission.
He suggested that asymptomatic patients have become the new concern in our virus battle, but it should not be a source of excessive concern as the scale of patients, severity and contagion ability of the virus, are not serious and are controllable.
Li Lanjuan, a renowned Chinese epidemiologist from East China's Zhejiang Province who has fought the COVID-19 epidemic in Wuhan for more than two months, tried to ease public concerns over Wuhan's reopening.
"People leaving Wuhan will have extra nucleic acid tests for COVID-19 at their destinations and some may also undergo a 14-day quarantine. So, as long as everyone is responsible for their own health, we should be safe," Li explained.
"Given current epidemic prevention and control measures taken in China, asymptomatic infected persons can be detected and controlled in time, and they are less likely to cause a new epidemic outbreak," said Zhang Boli, an academician at the Chinese Academy of Engineering and one of the leading experts advising on the epidemic fight in Hubei.
Zhang also noted that there is no need to overreact, as an epidemiological investigation is currently underway in Wuhan on the novel coronavirus infection, which could help detect asymptomatic patients in time.
Antibody testing could also reflect the immunity status of the population. Local authorities in different regions across the country are now conducting nucleic acid testing and health inspections of people returning from epidemic-hit areas.
Under the current strict control measures, people who left Hubei have been quarantined for a long enough period. They have had some health checks and are as healthy as people from other areas. They will not pose any special risks, said Professor Lu Lin from Peking University's Sixth Hospital who is also an academician at the Chinese Academy of Sciences.