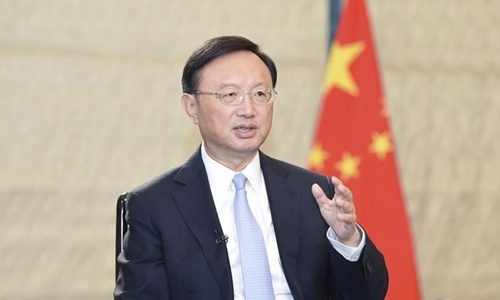 The Meeting of BRICS National Security Advisors on Thursday is a good opportunity for easing the ongoing border standoff between China and India, with experts saying that expectations of disengagement and de-escalation near the Line of Actual Control are high, but whether border tensions can be peacefully settled before winter depends on India's sincerity.

Yang Jiechi, a member of the Political Bureau of the Central Committee of the Communist Party of China (CPC) and also director of the Office of the Foreign Affairs Commission of the CPC Central Committee, is set to attend the videoconference at BRICS (Brazil, Russia, India, China, South Africa) organized by Russia, which Indian National Security Adviser Ajit Doval will also attend.

While the meeting agenda focuses on terrorism, cybersecurity and cooperation and no bilateral talk between China and India, is scheduled so far, expectations that Yang and Doval will use the platform to take the dialogue forward on disengagement and easing the border tensions between the two countries are running high.

Even when multiple rounds of talks failed to ease tensions and heavy troop deployment was seen in the region, the two countries did not stop seeking opportunities for talks. Chinese observers view the BRICS as an important platform for the two countries to discuss the border issues and reach some common ground if the two could talk directly.

Zhao Gancheng, director of the Center for Asia-Pacific Studies at the Shanghai Institute for International Studies, told the Global Times that as Yang and Doval have known each other for a long time and also represent their official stance, the meeting at BRICS brings hopes of peace and shows their willingness to pursue as many opportunities as possible to handle the tensions.

But Zhao said that whether the ultimate solution will be reached depends on India, as the country has been showing no signs of conceding since the border standoff in May and continues to provoke the PLA.

Ahead of the meeting, reports from Indian media said that the Indian army is ready to be deployed in the harsh winter months, as it has stocked up on all essential supplies, including food, clothing and fuel for its soldiers in Ladakh.

Previously, the joint statement and five-point consensus reached by both Chinese and Indian foreign ministers in Moscow marked a substantial step in cooling the current border situation, but none of them were realized as India cannot keep its word, experts noted.

Hu Zhiyong, a research fellow at the Institute of International Relations of the Shanghai Academy of Social Sciences, told the Global Times that China should be prepared to face the fact that a consensus with India is possible if they meet, but should also remain vigilant over whether India can keep its promises.

By continually going back on their word, India is wasting the opportunities and high expectations that China has for peacefully settling border tensions before winter, Chinese experts said.

Their attitude to agreements has disappointed China, but China has not stopped its efforts to solve the crisis in a peaceful manner, experts said, calling for India to show their sincerity at this time as well.