Chinese officials who demonstrated effective leadership amid the coronavirus outbreak made the news in an article published on Singapore newspaper Lianhe Zaobao on Thursday. 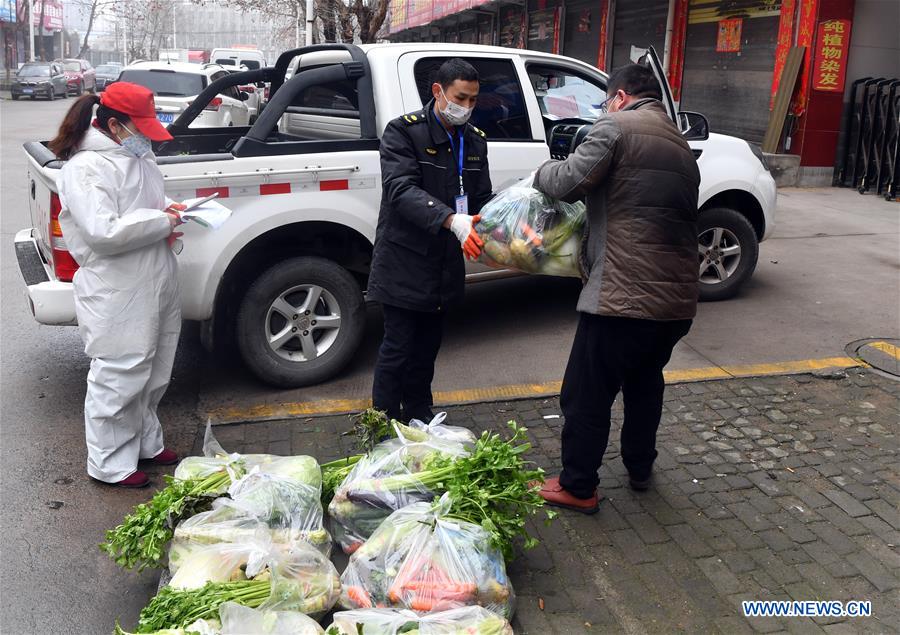 Staff members handle a bag of vegetables to a citizen in Guangshan County, central China's Henan Province, Feb. 7, 2020. Guangshan County, located on the border of Henan and Hubei, conducts strict prevention and control measures during the battle against the novel coronavirus epidemic. Local authorities have coordinated and established Wechat groups, so as to enable vegetable supply based on specified demands. (Photo: Xinhua)

In the current climate, Yang saw the novel coronavirus outbreak as a test for Chinese officials. Analysts say that those who have shown the capacity for effective policy-making during the epidemic can build a positive image that will help boost their political careers.

With a population of more than 100 million, Henan Province, also an important transportation hub, stood out for being one of the first provinces nationwide to start epidemic prevention and control. It also constructed a makeshift hospital that is specifically for treating COVID-19 patients in 10 days shortly after Wuhan started building the Leishenshan Hospital and Huoshenshan Hospital.

Seeing the measures adopted by all levels of government in the province to ensure the safety of its residents, the name of its provincial governor, Yin Hong, has appeared in top searches on Chinese social media Weibo. Some netizens even joke about bringing the provincial governor back to their hometown for quicker and more satisfying epidemic control results.

Sichuan Province in southwest China also pioneered in a series of response strategies including drafting the list of local hospitals receiving COVID-19 patients, temporarily blocking road travels from and to Wuhan and sending medical teams to Wuhan.

The author believes that its provincial governor Yin Li’s acumen for public health crises plays a key role. According to open data, Yin had management experience during the SARS outbreak in 2003. The 58-year-old official also studied in Russia for his doctor’s degree in public health.

Yao Gaoyuan, mayor of Wenzhou in Zhejiang Province, impressed the public with his recent interview with CCTV where he provided many statistics while briefing the latest developments of the outbreak in the city and relevant actions taken by the government.

While the number of newly confirmed patients outside Wuhan is on the decline, multiple cities in Zhejiang Province began rolling out measures, like reimbursing the transportation tickets for out-of-province workers through government funding for local enterprises, to return to operation.

In the end, Yang warns that the next task Chinese officials are facing would be a new one. For officials who scored an A in the early stages of epidemic prevention and control, their race to coordinate epidemic containment and economic development has just started.

Lianhe Zaobao is the largest Chinese-language newspaper in Singapore with a daily circulation of about 200,000.